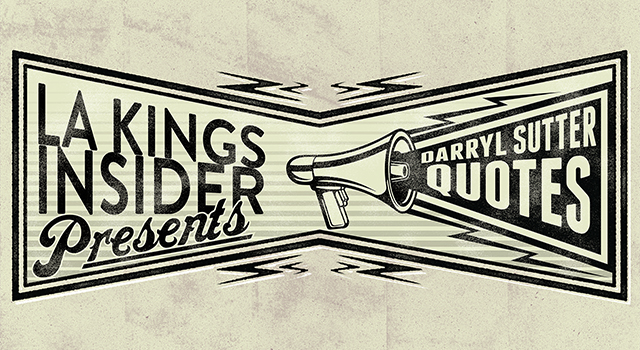 On the feeling of waking up on Sunday morning knowing that the season was over:
I think we knew in Calgary our season was over, and we responded really well in our last home game. It’s what we talked about. Quite honest, when you’re the defending champion, what’s the difference? You’d be asking the very same question if it was the first round, second round or third round. So that’s how you feel. And I said it the other day, and those are my feelings. It’s incomplete because when you’ve won it, then you want to try and do that again. That’s what we started doing yesterday.

On whether his coaching staff will remain intact:
Yep. All our coaches are under contract.

On comparing the feeling of missing the playoffs to losing in the conference finals:
I’m already looking forward to it. This team hasn’t had any recovery time – coaches, players – and we’re going to get that. You’re going to get a full summer. You look at all the young players in here who for sure you know can be better players. You look at from Kopi’s age group back down, and you look at the star factor in that group, those guys haven’t had any time. They’ve got some skill development to work [on]. They haven’t had an opportunity to do any of that. They haven’t had an opportunity to train properly, so it should make ‘em better. I look at points of our season this year where you know the players so well and you trust them so much of what they bring in terms of their work and their effort and all that, and that’s never a question. But there’s times where they couldn’t give you any more. You looked at ‘em, and you knew they’d given you all they had. Whether it was emotionally or physically, you know what? When you break it out when you’re not a playoff time or when you’re a team that loses in the first round, second round, third round, everything is two weeks when you look at it, right? So that’s two weeks of hard ass activity, and then the recovery part of it, well, we haven’t had that. We’ve had 40 or 50 days of actually training. So now a lot of these young guys are going to get 11 or 12 weeks of it. [Reporter: Darryl, talking about that recovery time, is it almost better in some ways not to make it than to have to play two rounds?] No, obviously you’d rather make it because I’ve said this a lot. You guys have heard it a lot. It’s harder to make the playoffs. That’s the only way you can win the Stanley Cup, is to make the playoffs in today’s game. And the game is changed because of the way the divisions are set up. [Reporter: But I just meant from the recovery, the standpoint of recovery]. No. If you look at it, there’s an equation in there, meaning how much time they need off and then when they can start training, and I think the biggest advantage you’re going to have this year is guys can get on the ice earlier. We’ve planned training camps still around recovery, almost, and they’ve done a really good job of it if you look at our three regular seasons, when we went to the finals, lost in the conference finals, and went to the finals again. We’ve done a really good job in terms of our managing that and getting off to good starts, but there was always times during the season, and this year you could see it in January. If you go October, November, December, that’s a hundred-point clip. If you go January, then you drop off, and I think what it is, your record’s like three-four-and-four, maybe – something like that – that’s where it hit the wall. And then you look at February, March, April, that’s pushing Anaheim for the division. We’ll be good.

On whether it would be advantageous for younger players to play at World Championships:
I think, quite honest, personally, any of the young players that get asked who haven’t obviously ever got that situation before – World Championships or Olympics – it’s a stepping stone to someday playing in the Olympics. I think that there’s several players in both our North American countries, and obviously, what is there, Kopi, Gabby, depending on where Andrej was in terms of skating. That’s something that’s done in the middle of May. I think that opportunity doesn’t come along for players in this organization very often, so that’s what I think. It doesn’t mean that’s what the player thinks, or what management thinks, but that’s how I feel about it. I think if they get the opportunity, guys who have never gone, I could see the guys who played in the Olympics last year and played in the finals, I don’t think that they would be emotionally into that at all. But the young guys, I think should, could would.

On several key players potentially not returning to the club:
Well, who are they and who would that be? [Reporter: Well, you’ve got guys like Stoll and Justin who are unrestricted. Guys who have been integral parts of this team.] If they’re here, my job as a head coach is to push ‘em, and if they’re somewhere else, I’d cheer for ‘em. Same thing when we won. It’s got nothing to do with not making the playoffs how I feel about those guys. It’s part of a big family that won two championships. Unfortunately sometimes a family has to go somewhere else to continue their careers. If there was a way for all our players to be back, I’d want them all to be back. That’s the way I feel. [Reporter: A guy like Jarret, where’s his biggest contributions? I mean, the room, the bench? Where does he make his biggest-] I think all of the above. I don’t think that’s changed. His role hasn’t changed one bit since we won our first championship here. He may have had a different role prior to that, or in Edmonton, but his role here doesn’t change. Guys get older and their roles change and minutes change and all that, that’s natural. You don’t get retirement contracts any more. There’s a salary cap and there are good teams and the league’s too close. And I think with Stolly, I mean Stolly missed all of training camp. Say what you want, our goal in this last training camp was to get him in one game. One game. So you think what the last few years [have done] in terms of a toll on him. He had hip surgery, and then he had the medical issues. You know, it wasn’t an easy year for Jarret by any means when he got hurt again. Those guys are all the same to me. You can leave 23, and it wouldn’t bother me if it was the same 23.

On whether the incident in Tampa was blown out of proportion:
Well, quite honest…if you’re asking that question, then you should go to the New York Post, because you don’t know much about sports and you don’t know much about locker rooms, and the biggest part of anything in terms of players having meeting or coaches and players having meetings, the biggest thing is keeping the media out of those meetings, and if you look at where we were on that trip, that was part of us making a movie for the NHL, and we talked about that, about being a little too open. I think the guys who follow us every day and understand get a pretty good handle on all that. [Reporter: As a former player, stuff like that does happen more than us as media or even fans would know.] That’s often that it does, and it should happen. Do you have family? [Reporter: Yeah.] So once in a while do you close the door and talk to your family? [Reporter: The communication’s sometimes not great, but yes, we do.] Or private? Or sometimes veteran players by themselves? Or sometimes veteran players with younger players? I did it as a captain, I did it as a coach, I did it as a general manager, and I totally get it. I totally understand that. And when you have a group that’s used to being so successful, that’s why they’re so successful. [Reporter: Growing up with all those brothers, too. It’s part-and-parcel.] Part-and-parcel of somebody from New York who doesn’t know what they’re talking about, and giving it to somebody else who doesn’t know what they’re talking about, and then it takes somebody who knows what they’re talking about, either a player or a coach to explain to those people so they understand. They know what they shouldn’t have said. [Reporter: I’m sure there would’ve been some good stories with Pully back in the day.] He might’ve locked you in. It’s quite silly that people bring it up. If we’d have made the playoffs, then they’d have been talking about how we’re going to lose in the first round. The same people who talk about that stuff are the same people who want people or teams or players not to do well.