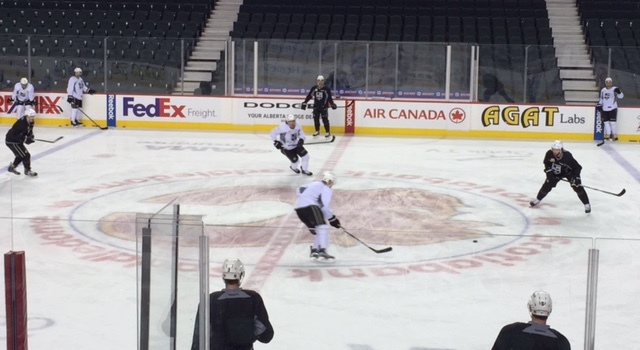 The Los Angeles Kings wrapped up a morning skate at the Scotiabank Saddledome and have since returned to the hotel. Because of the tight schedule – the Kings are either in a three-in-four, four-in-six, five-in-eight, or all of the above, depending on how you want to look at it – it was an optional skate.

-Because the skate was optional, no line rushes were held and the lines shown at yesterday’s practice will be projected later today in the game preview. In one of the easiest bets you’ll ever make, bet on Jonathan Quick to start in net.

-Bob Hartley wouldn’t tip his hand towards any lineup changes, though it’s expected that Brandon Bollig will enter the lineup for 16-goal man and checking forward Lance Bouma, who has an upper-body ailment. Jonas Hiller is expected to start in net, with Jonio Ortio expected to back him up.

Hartley's sassy shot to prognosticators: “If we would have gone w/many of your predictions, we could have spent the winter in Punta Cana."

-Make sure you check out my LAKings.com story, which went live along with a press release earlier today. The Kings are forming a high school hockey league in an effort to continue to grow the game locally, and Jim Fox will serve as commissioner. Unfortunately, my Oakwood Gorillas won’t be fielding a team (not yet, at least), though many San Fernando Valley natives will be able to join the district team forming out of Pickwick Ice. Lots of rinks are involved. Give it a read. More details are here.