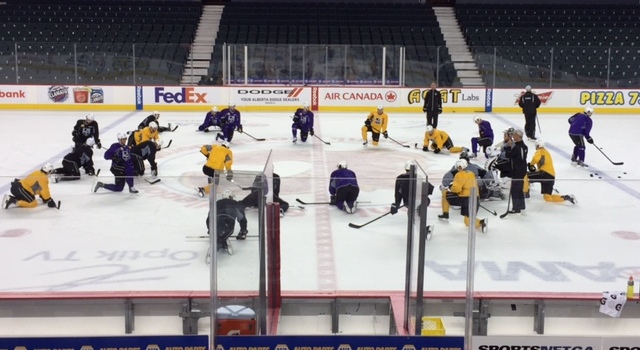 Good afternoon from Calgary, where the Kings wrapped up practice roughly one hour ago. Lines utilized at today’s skate indicated no changes from recent games:

-The practice was a typically quick late season skate with flow drills. “Get your skates under you, get to feel the puck,” Dustin Brown said. “It’s more about tomorrow than it is about today.”

-Darryl offered 20-year-old, 31-goal center Sean Monahan deserved praise. “I don’t think Monahan gets enough credit in the league,” he said. “Everyone talks about the centermen in this conference, and they don’t talk about Sean Monahan. They should.” Perhaps there was a reason behind Sutter’s acclaim. His quotes will follow shortly.

-A few quick updates on injured Kings Tanner Pearson and Andrej Sekera: both skaters will definitely be out for the 81st and 82nd games of the season. Pearson (broken lower left fibula) is scheduled as of now to have an X-ray next Tuesday, while Sekera (lower-body) will continue to be evaluated, and his availability for a hypothetical first round series will be determined once that bridge is crossed.

-I’m hoping to have a few notes on Manchester up today, but those might have to wait until tomorrow.

-The Flames held an optional skate today. Some quick notes:

Looks like an optional practice for the #Flames this morning. Ortio out there with Hiller and Thiessen.