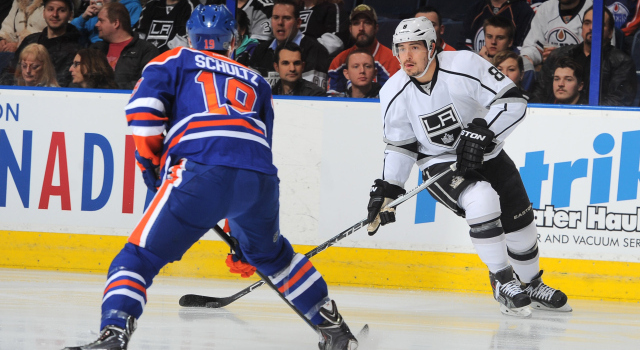 On whether the Kings got off to a “sluggish” start:
We got in late, and we knew that they were going to come with energy early, and I thought actually we did a pretty good job of it early in the game. They scored a couple faceoff goals, and we couldn’t score.

On whether the legs weren’t there when trying to find the equalizing goal late:
I mean, we had to use all the forwards. We were hoping we would get a little bit of a break, and we obviously did on Drew’s goal. We couldn’t get the next one.

On the decision to start Martin Jones:
I think all of it. I mean, look at our schedule lately and what we still have left. Tonight’s three-in-four, the next one’s four-in-[six], and we play an afternoon game on Saturday, so you know what? You’ve got to use ‘em both. Jonesy played really well in Minnesota, and he had a strong game tonight. It certainly wasn’t an easy decision. It wasn’t a decision that was made yesterday. It was one we made a few days ago.

On whether he gives the team a speech now, or whether he doesn’t say much:
No, we talk. We talk a lot, yeah. It’s part of it. That’s what communication is.

On the playoff race:
Got to win in. It’s obvious. You know what? We’ve been saying that for a while. We’ve played really well since the All-Star Break. Just try and continue to.