So what exactly happened the last time these teams met? 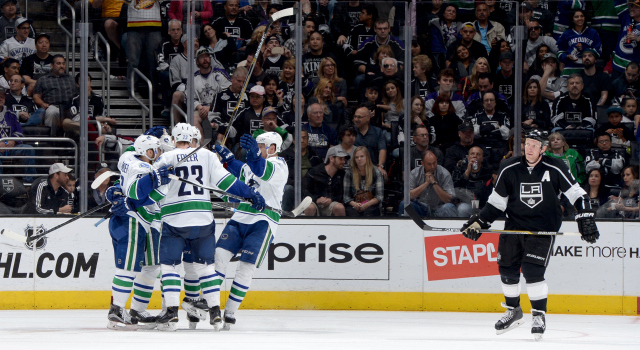 The Los Angeles Kings have played the Vancouver Canucks four times this season. In the four games, Los Angeles has limited Vancouver to 19, 16, 19 and 42 shots on goal.

To quote Dave Grohl, who took in Saturday’s Kings win over the Avalanche, “What if I say I’m not like the others?”

Those 42 shots against in the Canucks’ 4-1 win on March 21 at Staples Center stick out in a series that has tilted towards the Kings in recent years. Including playoff games, Los Angeles is 14-6-0 in their last 20 games against Vancouver and holds a three games-to-one lead in this year’s season series.

While the Kings led 1-0 in their last meeting and had opportunities to build on their lead, something was lacking in a performance in which 54 of the 95 shot attempts at even strength were directed at Los Angeles’ net. The Kings lead the league in five-on-five Corsi-for; the Canucks rank 20th.

Whatever was missing wasn’t dismissed as a one-off anomaly, Dustin Brown noted.

Los Angeles has taken the majority of the shot attempts in all but one game since playing Vancouver and allowed only 10 shots on goal in the 3-1 win over Colorado on Saturday, so whatever was missing that one afternoon in late March appears to have been remedied.

“I think it starts with our own end getting back, forwards getting back, and D making tape-to-tape plays goes a long way,” Brown said. “Coming through the neutral zone clean, I mean it’s a trickle-down effect. If you’re quick out of your zone, you’re going to be quick into theirs. The offensive zone stuff is just spacing and something we’re pretty good at when we have the time and when we get in there properly.”

Speaking of ‘getting in there properly,’ the Kings were adept in carrying the puck into the offensive zone and setting up for extended periods in Saturday’s win over the Avalanche.

“Yeah, we played pretty well. I think we’d maybe like to score a few more goals, create a few more chances, but defensively we played great,” Drew Doughty said. “We didn’t give Quickie much work. The point he was called upon, he made the big saves. If we can do the same kind of thing, I think we’ll have a better chance at winning.”

Dustin Brown, on what he’s expecting from a heated rivalry game tonight:
These are the games you want to play in as an athlete, as a competitor. Both teams need the win and it’s getting down to that crunch time where you’re fighting not only for playoff spots, but positioning in the playoffs. This is a vital game for both teams.

Drew Doughty, on the 4-1 loss to Vancouver in March:
We just didn’t have our best effort. That was probably one of our worst games we’ve had in the recent month, but they played a good game. We didn’t. We were still in it kind of going into the end, they got I think two empty netters or something like that. We know what we’ve got to do differently in order to win.