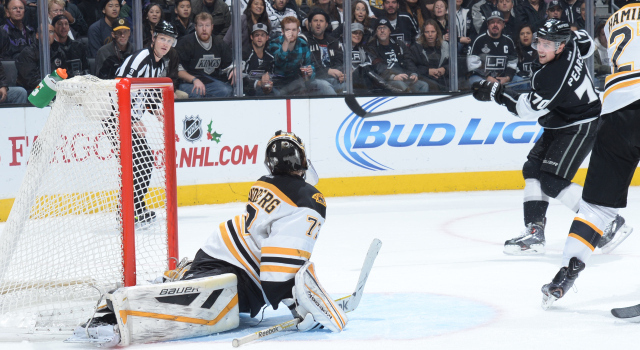 Tanner Pearson has signed a two-year contract extension with the Los Angeles Kings, the club announced Thursday. The average annual value of the contract is $1.4M, as first reported by Elliott Friedman. Pearson would have been eligible for restricted free agency on July 1,

Based on conversations with hockey operations, Pearson’s extension was expected to be next in line to be finalized. An extension for RFA goaltender Martin Jones is likely to follow, while negotiations with RFA forward Tyler Toffoli are expected to take longer. Forwards Andy Andreoff and Nick Shore are also bound for restricted free agency, while Justin Williams, Jarret Stoll, Robyn Regehr, Jamie McBain and Andrej Sekera are eligible to become unrestricted free agents on July 1, the same date that Los Angeles will be able to negotiate an extension for Anze Kopitar, whose current seven-year, $46.7M contract expires after the 2015-16 season.

Based on financial information that was available when CapGeek.com operated, the Kings now have roughly $64.15 million allotted to 17 players for the 2015-16 season, a figure that includes Slava Voynov’s contract. Next year’s salary cap isn’t expected to rise much farther than $69M, if it rises at all.

I’ll have reaction from Pearson when he leaves the ice at the Kings’ morning skate. The left wing who suffered a broken lower fibula in his left leg on January 10 has skated since early March but may not be available to the team in the regular season. The expected recovery time from his injury, which required surgery, is three-plus months. Los Angeles’ final regular season game takes place at Staples Center against San Jose on April 11.