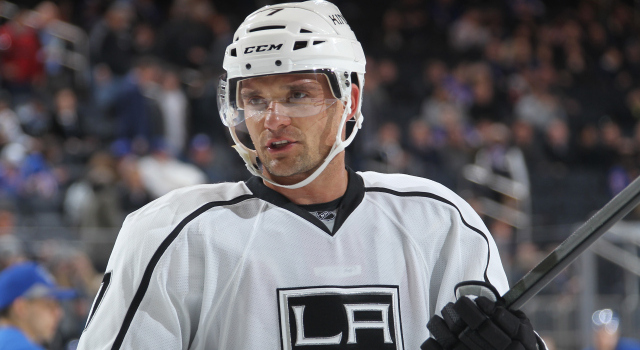 Defenseman Andrej Sekera, who suffered a lower-body injury when a Blackhawk fell on his leg late in the second period during Monday’s 4-1 loss at the United Center, did not participate in today’s practice at the Toyota Sports Center.

The only update came on Sekera’s status came from coach Darryl Sutter.

“He’s out,” Sutter said. “He hasn’t skated for a couple days, and he’s seeing more of the doctor today, and I’m sure that you guys seem to get information better than I do.”

No timeline on a potential return or specifics on the injury were provided. With Sekera out, Alec Martinez moved to his off-side to skate with Robyn Regehr, and Brayden McNabb skated to the left of Matt Greene during Wednesday’s practice. More on the context of Sekera’s injury can be found here.

“I think Andrej and I were just starting to feel really good together, and it’s really just horrible timing for something like that to happen, but it does, and it’s happened quite a bit this year with our defensemen and messing up the pairs,” Regehr said. “The good thing is is that we’ve got Alec back there, who has the ability to switch back and forth between left and right, so now he’ll be back playing the right side, and I played with Alec last year a little bit, so we’ll have to try to get comfortable with each other as quickly as we can.”

Given that McNabb was playing some of his best hockey of the season when he ceded his spot in the lineup to Alec Martinez, there’s ample confidence in the young blueliner’s ability to step in and provide quality minutes.

“Absolutely,” Sutter said. “When we took Brayden out, we kept experience in. It wasn’t Andrej coming in, it was experience. If you’d do it in comparison if you’re securing a playoff position, then for sure, you’re moving guys in and out of the lineup. You fall back on winning experience. You don’t fall back on ‘over-the-hill’ experience.”

Sekera, who was acquired on February 25 from the Carolina Hurricanes in exchange for a conditional first round draft pick and defensive prospect Roland McKeown, has appeared in 16 games with the Kings, totaling one goal, four points and a plus-five rating. He has three goals and 23 points in 73 games overall.