Robyn Regehr is the Los Angeles chapter of the Professional Hockey Writers Association’s nominee for the 2015 Masterton Trophy, awarded annually to a player who “who best exemplifies the qualities of perseverance, sportsmanship, and dedication to hockey.”

The winner of the Masterton will be selected in a poll of all chapters of the PWHA at the end of the season. Previous Kings to have won the Masterton are Dave Taylor (1991), Bob Bourne (1988) and Butch Goring (1978).

Honoring the late Bill Masterton, the former Minnesota North Star who died on January 15, 1968 as the result of an on-ice injury, the Masterton Trophy has been awarded every year since 1968. Last season, Willie Mitchell was nominated by the LA PWHA for the trophy that ultimately went to Dominic Moore of the New York Rangers. Jonathan Bernier was the Kings’ nominee in 2013.

Regehr, who turns 35 in April, has two goals, 10 points and a plus-seven rating in 61 games while battling through the inevitable casualties that come with the style of hockey and difficult minutes he provides.

From the Los Angeles chapter of the Professional Hockey Writers Association:

Regehr is an old-school, stay-at-home defenseman who has been the glue of the Kings’ defense corps in many ways this season while Slava Voynov has served a league-imposed suspension and Alec Martinez missed time because of a concussion. The oldest player on the team at 35, Regehr has been poised under pressure and remains a physical force, averaging more than three hits per game and more than 20 minutes’ ice time per game. Whether paired with the adventurous Drew Doughty or another offense-minded defenseman, Regehr has persevered through his own injuries to lead by example. 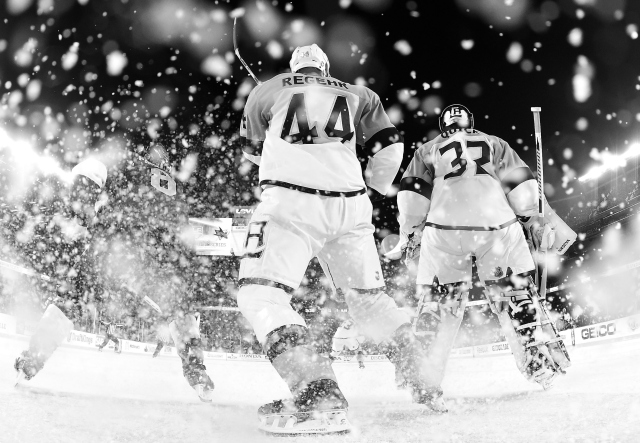