Matt Martin, Dustin Brown and the nuances of “hitting” 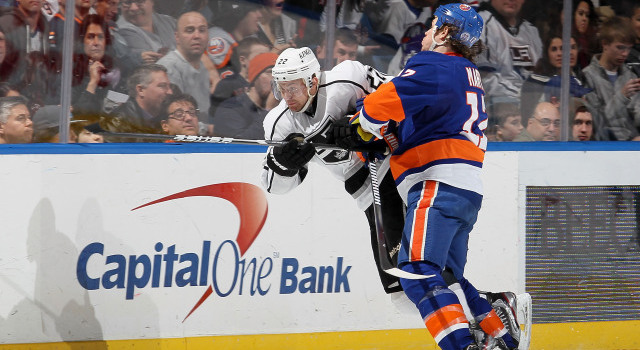 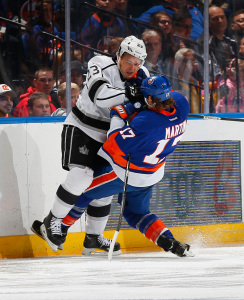 So, let’s just get it out of the way: “hits” aren’t the greatest statistic in the National Hockey League. In general, less successful teams will issue more hits because they don’t possess the puck as much as more effective teams.

But the Los Angeles Kings, who have led the league in five-on-five Corsi-for percentage since the start of the 2011-12 season, have also finished either first or second in the league in hits over that span. It’s a trend that lends itself to the designation of the Kings as a “heavy” team also capable of protecting the puck.

“I think he’s a big guy and I think he just does those things that it hard to play against,” Brown said of Martin. “On this team, he’s a fourth line guy for them and that’s kind of what you need from a guy like that. I haven’t looked at his stats, but I think he’s starting to kind of put the other part of it together. He’s just one of those guys you’re always aware of when you’re on the ice.”

Martin has etched out a fine role this year. With eight goals and fourteen points, he’s held his own on a line that has been both productive and difficult to play against. Center Casey Cizikas (7-8=15) and right wing Cal Clutterbuck (6-8=14) have helped form a versatile, hardworking group that appears to be as effective as any “fourth line” in the NHL.

“I think that if you look at their fourth line and our fourth line, they have to be productive players. They can’t be guys who give top players a rest,” Darryl Sutter said. “They have to be able to play shifts against top lines. If you want to have success on the road, if you want to have success over the long term in today’s game, what you call your ‘fourth line’ has to be able to play shifts against John Tavares, and I’m sure that’s how the Islanders would see it, too. They can have those guys out on defensive draws and situations during the game or after penalties or things like that. That’s basically what it boils down to, is situational plays now where those guys can be on the ice. When we have a problem playing Nolan, Richards, Clifford in shifts against the other team’s top lines, you can’t do that. You get beat. It looks nice once in a while when you say ‘he hit him’ or ‘he knocked him over,’ but at the end of the day, if John Tavares can make a play against him that he shouldn’t have been able to make, then you’re going to get beat.”

Hits may not even be as important as being well positioned, well-balanced and difficult to move in key areas. In the first period on Tuesday, Dan Girardi of the New York Rangers was as effective as any player on the ice away from the puck; he was credited with just one first period hit.

“I think the physicality isn’t as much about ‘big hits,’ it’s about finishing your checks and being hard on sticks and on your pucks and that sort of thing,” Brown said. “It all adds up.”

Dustin Brown, on whether he pays attention to the statistic of hits:
I don’t look at it as a number, I don’t even know what my number is now. For me, it’s just more a part of my game. The game is definitely changing. Those big open-ice hits or the big hits that happened five or six years ago just don’t happen as often. Just the way the game is played now, it’s much faster and much harder to get those hits. But it’s not necessarily about those hits. I mean that’s what people remember, but it’s the little bumps and grinds and just finishing those checks that kind of wear teams down or get under their skin a little bit that helps us down the stretch.

Brown, on whether his physicality has evolved as the game as evolved:
I think it has over the years. If you look at me really young in my career, I’m running out of position for hits. Over the years I’ve kind of learned that hits are going to be there, you just have to let the game come to you. It kind of goes back to those big hits. You can create them if you want to run out of position. I think that was probably a lot of what happened when I was younger, but they’re still there, they’re just not as often.

Kyle Clifford, on whether his line is comparable to the Islanders’ “fourth line”:
Yeah, I think a lot of teams in this league, the good ones, have four deep lines. Usually the bottom two are a little heavier and play with a little more grit.

Clifford, on Matt Martin’s ability to finish checks:
Yeah. I played against him in junior. He plays hard, he plays honest, he contributes at both ends of the ice. He’s not just out there to fight, he’s able to put the puck in the net a little bit and play a sound game.

Clifford, the Islanders’ fourth line being similar to a Western Conference fourth line:
Oh yeah, absolutely. I think, especially out in the West, it’s kind of the structure you’re seeing a lot more.