Richards: “If you’re not here, you work to get back” 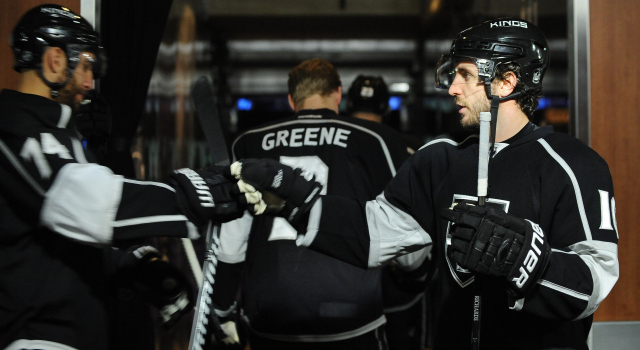 Today’s Los Angeles Kings roster move made more noise than a typical mid-March transaction as two-time Stanley Cup winner Mike Richards, who was placed on waivers on January 26 and assigned to AHL-Manchester the following day, was recalled by the club in the thick of a playoff race.

According to Richards, the team didn’t present much of a plan on how his time in Manchester would elapse, but rather the assignment would be more open-ended.

“There wasn’t much said,” Richards said. “So, to be honest, I didn’t really have an idea of what was going on at all. It’s not a bad thing. It is what it is.”

Richards, who had 14 points (3-11=14) in 16 games while in Manchester, says that he feels good and expressed optimism in returning to the Kings for the current playoff push and practiced on Sunday alongside Kyle Clifford and Justin Williams. He never returned to Manchester after traveling to Los Angeles two weeks ago to take part in conditioning and fitness testing.

“The first week I was [in Southern California] it was some pretty good workouts and stuff and then the second week was some testing and stuff, but I think it went well, obviously, since I’m here.”

And, as would naturally occur for an athlete who has won 26 playoff series between junior and professional hockey – not to mention Olympic and World Junior gold medals – there were those moments in which self-realization surfaced as thoughts on whether he’d make it back to the Kings crept into his mind.

“Yeah, I thought that quite a bit actually, but you just keep working just like you would if you were here,” he said. “It’s no different than wherever you are. Obviously you want to be here, but if you’re not here, you work to get back. It’s the same as everyone else’s position and you take it like that and go from there and hope at some point you get to come back.”

In 47 games with the Kings, Richards has five goals, 15 points and a minus-seven rating.

Mike Richards, on whether Monarchs coach Mike Stothers had a specific message or told to just “go play”:
Yeah, pretty much that’s it. He was good to me and [I had] a pretty good dialogue with him with different things in obviously not an ideal scenario. But at the same time, he was great. He helped me out with different things. It’s always nice to get another opinion or a different voice I guess to help you out. I mean he’s seen me play from when I was 16 when he was with Owen Sound. There is a different voice I think that’s kind of seen throughout, really, my whole hockey career.

Richards, on how he treats the final stretch of the season with the Kings:
Well, it’s exciting. It’s both back to work too, but this is the most exciting time of the year no matter where you are or what you’re doing. But especially here, it’s fun to play down the stretch and have that big playoff push. It’s an exciting time to play hockey and it’s definitely the reason why you play, the games that are going down the stretch.

Richards, on whether he accomplished all he wanted to during his AHL stint:
Yeah, I feel good. It’s a tough question. I don’t know. I feel good right now, that’s the main thing.