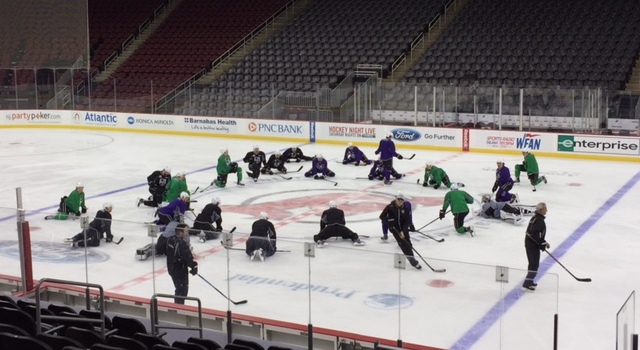 Good afternoon from New Jersey, where the Kings have arrived back at the hotel following a full team practice at the Prudential Center. If you’ve been following along, there was nothing of note that happened at today’s practice. Nothing to see here…

…oh, other than the fact that Mike Richards and Tanner Pearson both took part in the team’s skate. Throughout the process, Richards admitted that he wasn’t sure if he’d make it back to the team. “Yeah, I thought that quite a bit, actually, but you just keep working just like you would if you were here,” he said. As for Pearson, he took the occasional line rush but was limited otherwise. In regards to any discomfort, he said he doesn’t “feel too much” when he skates, and that “as the bone has gotten better, the comfort level has gotten better, too.” Stories on both Richards and Pearson will follow this afternoon.

-In addition to some line rushes, the team also took part in shootout practice, as this time lapse video shows:

-Don’t read too much into the four player consortium on the top line; both Brown and Lewis took rotations through the top two lines. Any line rushes held tomorrow will provide a more accurate gauge on what the Kings’ lineup might be.

-Tyler Toffoli won’t receive any supplemental discipline for his boarding major on Alex Burrows yesterday, as was reported by several sources.

Quintal warned Toffoli that it was a dangerous play on Burrows but ultimately feels penalty on ice sufficed. So no further discipline

-Darryl Sutter quotes will come shortly, followed by stories on Richards and Pearson. 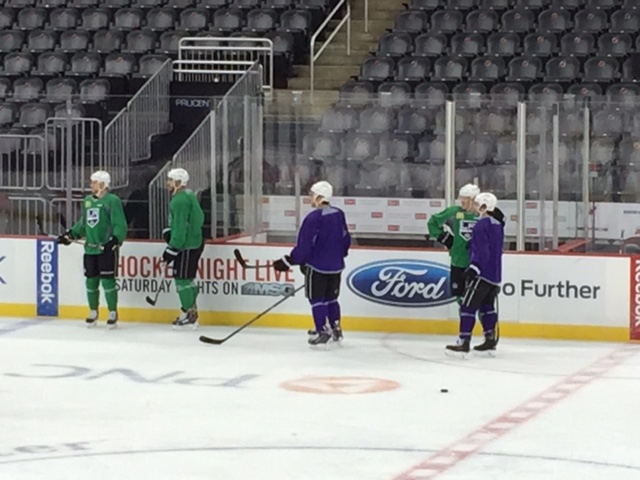