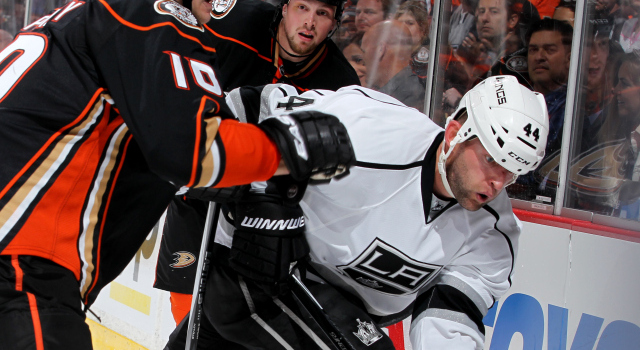 On the overtime goal:
Kesler made a great play down low on Drew, came all the way around and shot the puck. Quickie didn’t see it. That’s what I saw from the bench.

On the third period:
We had enough energy to get a point. They looked fresher and were able to use four lines more than we were able to.

On why Anaheim has won eight games in an ultra-tight series over the last two years:
Probably because they scored one more goal than us. It makes sense, wouldn’t it?

On whether he had an issue with Anaheim’s second goal:
I’m not sure who the player was, but he shoved Muzzin, so basically that’s Muzz losing a battle of inches. He’s who ran into Jonathan. Not – im not sure who it was for them. [Reporter: Thompson, I think.] Thompson, yeah. I was trying to think – it was a four.

On physicality that was befitting of a playoff game:
We haven’t taken unnecessary penalties against them all year. If you look at it, the five games, there was no unnecessary stuff, and that’s what you’d expect. I think teams have enough respect for each other. They don’t want to put each other on the power play by taking a dumb penalty.

On Ryan Kesler giving the Kings “match-up problems”:
Yep. Kesler’s been – I can’t say other than against us – but he’s been a dominant player, for sure, in these five games against us, and if you looked before the game, and I think against us in the four games coming in, Getzlaf Perry and Kesler have eight or nine goals. He’s been a dominant player for ‘em. [Reporter: That’s what they got him for. To compete better against you guys.] Well, this conference, you need the big centermen. But I think that Kopi and Jeff played really well tonight, too. I think Kopi’s had a really good five games against Anaheim this year, and Jeff’s had a lot of good ops and scores a power play.