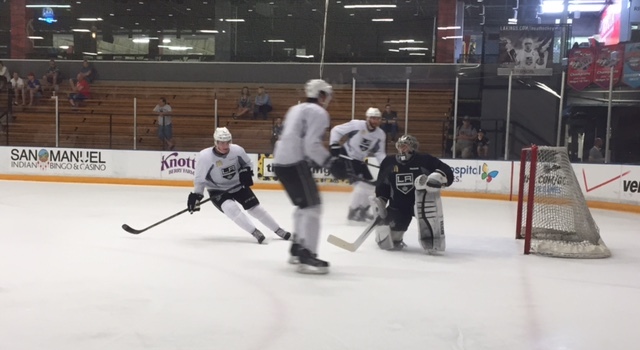 As always, a very good morning to you and yours, Insiders. Before we get down to the nitty gritty, here’s your Daryl Evans update:

-The Kings’ radio color commentator worked at a slightly slower pace with a running partner at yesterday’s L.A. Marathon, completing the 26.2 mile journey in just under five and a half hours. He has skated already this morning and plans on going for another run later this afternoon. Daryl’s weekend plan of attack? He ate a full cheese pizza after Saturday’s Kings game, fell asleep at around 12:30 a.m., woke up at around 4:00, ate a banana, drank a bottle of water, and hit the ground running, literally. In case you’ve forgotten, Daryl doesn’t sleep.

-Jonathan Quick left the ice first and is expected to start tonight against Arizona. The Kings will factor into a completely different standings battle tonight: The Connor McDavid Sweepstakes. Calgary, Winnipeg, Minnesota, San Jose and Vancouver are off, though Arizona, Buffalo, Toronto and Edmonton all play. The Coyotes are 1-13-1 in their last 15 games; their two wins over the last 18 games have come in shootouts.

-The forward lines have been tweaked. “We’ve got guys who haven’t scored in 10 or 11 or 12 or 13 or 14 or 15 games, whatever it is, and some of them have had zero scoring opportunities for the last five as individuals,” Darryl Sutter said. “We’ll leave Jeff and Tyler together and leave Kopi and Gabby together and let everybody else see where they can play.”

-Jarret Stoll did not take the ice, and there is no further update on his status, other than that he continues to be monitored by the club. Alec Martinez was partnered with Jamie McBain at the morning skate but isn’t expected to play tonight, while Tanner Pearson joined the group late into the session as he continues to skate every other day. McBain and Stoll are expected to be scratched tonight, while Martinez and Pearson remain on injured reserve.

-Players were happy to see that former King and longtime Machester Monarch Andrew Campbell has been given a wide opportunity with the Coyotes. Several current players were at his wedding last summer. Campbell has hit the 21-minute mark in each of the last three games.

-For the Coyotes, forward Mikkel Boedker (splenectomy) and center Martin Hanzal (back surgery) are out for the season.