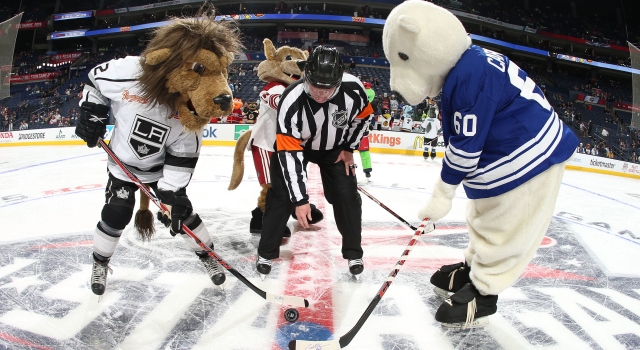 Nick Shore, he of the eight-for-nine performance at the faceoff dot two nights ago, spoke about his recent success in trying to win draws after having graduated to the highest level of professional hockey.

“Yeah, it’s good,” he said. “Anytime, as a center, you really have to bear down in the circle. That’s a possession, that’s a big deal if your team is winning them or losing them. There is a big emphasis on that, especially in today’s game. You really have to step up and get as many as you can.”

He’s not yet above 50% on the season, though having won 20 of his last 29 faceoffs, he’s upped his average to a 49.2% mark that’s perfectly respectable for a center with 21 NHL games to his name.

And when looking at the faceoff statistics available on the game sheets, it’s always interesting to see a few numbers beside Dustin Brown’s name. Brown plays both wings regularly, though he’ll take the odd power play shift at center and will often jump into the circle when a teammate commits a faceoff violation. Overall, he has won nine of 26 draws this season.

Earlier today Brown spoke about his occasional faceoff responsibilities, and the circumstances that lead him to be summoned to the dot.

Dustin Brown, on how he approaches the occasional faceoff:
Well, a lot of it is who I’m going against. You know who are the centermen, the really good faceoff guys on other teams every night. If I’m up against one of the better ones, I’m probably trying to go for a tie and get help. I think the one thing all wingers have kind of going in is, you have to talk to a centerman, but when the other centerman gets kicked out and a winger comes in, they think they have an easy draw. So it’s just trying to surprise them a little bit.

Brown, on when he takes the odd shift at center:
More so on the power play I’ve been playing center because, for whatever reason, just how the units have been working and I’m comfortable. Power plays, it is what it is, but I’ve played center before. A lot of time when I go to play for USA, I’m a centerman. Obviously at the Olympics they have enough guys coming, but I remember at the World Championships a lot of time I’d play center.

Brown, on whether it is difficult to adjust to the role of center at some point in a game:
I mean, the only thing that regularly happens is me flipping from right wing to left wing. That sometimes, it’s not a challenge from a standpoint of doing it, it’s more you’re playing the right side you naturally drift to the right side coming back into the zone. When you get thrown to the left side, sometimes you just kind of forget about it and you drift to the right side and then you realize you have to kind of recover to get over to the left. That’s probably the biggest thing, but I’ve probably flip-flopped every game I’ve played right wing and left wing, some variations of the lines, PK, like however the bench works out.

Overall, the Kings, a top-10 faceoff team for the past four seasons, rank tied for 11th in the league with a 51.3% faceoff percentage.