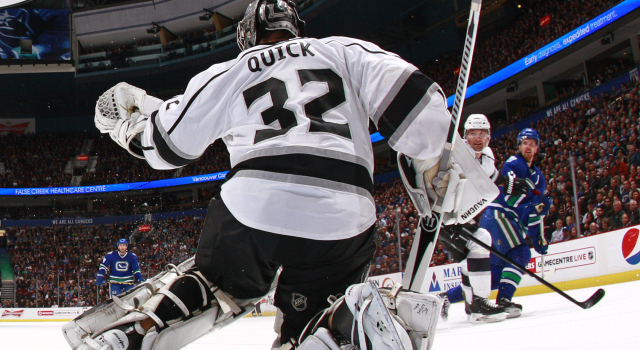 On five-on-five play, special teams play, goaltending and individual performances:
There wasn’t a lot of special teams. Our power play scored a big goal early and we scored a goal early in the third, which basically sealed it for us.

On the team’s forecheck finding success in the second period:
Both teams are known for a good forecheck.

On whether he’s surprised by the team’s ability to “deliver” when it needs to:
We’re trying to make the playoffs. There’s nothing magical about that. There’s good teams that are not going to make it, and there’s good teams that are. I know the big story at the start of the year was something about a ‘dynasty,’ but when your team changes – it’s a tough division. We’re fighting with Vancouver and Calgary to try and make the playoffs, and anybody who tries to think different or do something different, they don’t make the playoffs.

On whether the team’s improvement on the road is due to “things evening out” or “personnel”:
No. [Reporter: Anything you attribute the team’s seven wins in the last nine road games to?] All the support from everybody. It’s fantastic. It makes us feel good.

On scoring early and limiting chances against in the third period:
It’s a tight checking playoff game. How many times…have I said it, if you check you have a chance. If you don’t, you don’t. You can get beat 4-3 every night or 4-2 every night. That’s easy to do. I can coach to do that all the time.

On the team’s remaining home/road split:
I think what we have left is…six and nine, something like that? So, you know what? If you can get 40-something points on the road, then you have a chance to be a playoff team. That’s a fact. Our team last year, I think our record at home and the road was the very same. The year before we were friggin’ good at home and [road apples] on the road. You know what? That’s why you struggle to make the playoffs. You need four lines and you need six D and you need good goaltending, and when you don’t get that, you don’t win on the road because the other team gets the match-up that they want, and if you look at tonight, I know exactly who was on the ice for what for and against, and if you do it, you’re going to say best players versus best players. [Reporter: Top players were top players tonight?] I’m sure you’ll see who was on the ice for our goals and their goals.