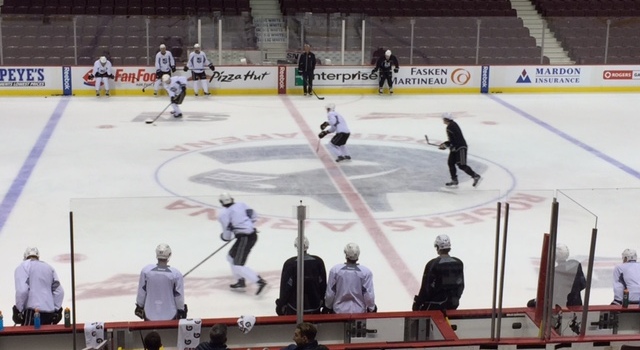 Good afternoon from Vancouver, where the Kings have returned to the team hotel after a morning skate at Rogers Arena.

Forward lines at the morning skate:

-So you may have noticed that only forward groupings are listed. That’s because the line rush-type drills the team opened the skate with included groups of three or four skating north-south up the ice, and even the defensemen were aligned in groups of three or four. As the skate progressed the defense broke off into pairs, though with an odd number of available defensemen, partners rotated. Jamie McBain remained on the ice for extra work with Andy Andreoff and Martin Jones, so don’t expect any changes from the 18 skaters who dressed on Tuesday.

-No surprises: Jonathan Quick left the ice first at the morning skate and is expected to start in net against Vancouver.

–Drew Doughty, on the raised stakes for this game:
Yeah, we really had to put a mark on these division games coming up at the end of the season and we need to win them in order to be in the playoffs. They’re big four-point games, so we’re kind of happy we have to see them three times, because if we can win those three games it gives us a better chance.

-Eddie Lack will get the nod against the Kings. Via @Canucks, Ryan Miller is expected back in two to three weeks.

-The Kings will get their first look at Ronalds Kenins, who has 10 points in 16 games and is apparently known as “The Latvian Locomotive.” Ben Kuzma can fill you in if you’re interested.

-I had some interesting conversations with Drew Doughty and Jake Muzzin earlier today about how the Kings have found success evading Vancouver’s forecheck. I’ll get that story up after today’s Darryl Sutter quotes, which should be posted in 20 minutes or so. Lots more to come on a busy day in the Pacific Northwest. Enjoy your Thursday, and thank you for reading, Insiders.