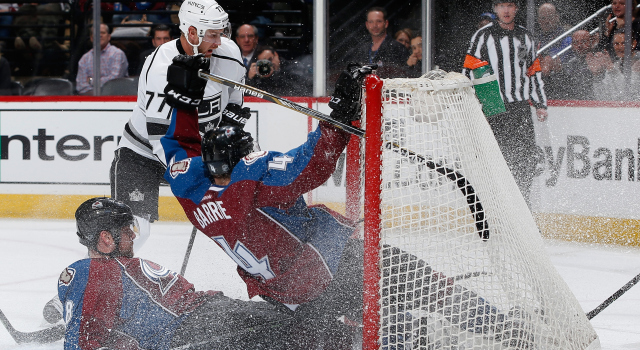 On the win:
I think we got through the first period. Gaborik’s power play goal was big, and killed a couple penalties.

On whether Kyle Clifford and Jordan Nolan are playing with more confidence, or whether their play is a byproduct of the entire team raising its game:
Well, they’re getting the opportunity to play some more minutes. You can call it whatever you want, but if I Was a young player and I was given a few more minutes, I would try and fulfill the prophecy.

On whether Brayden McNabb is playing with more confidence than earlier in the year:
No, I don’t know what confidence has to do with it. What does it have to do with it? If I’m playing in the NHL and I’m getting to play- [Reporter: You have confidence.] Yeah. I think the key tonight for Brayden was his partner was excellent. Veteran partner with him, and he was probably the best player on the ice. I mean, why are you asking about Brayden, because he had a couple points? [Reporter: Three points. I just look at the way that he seems to be-] So he got the puck and wristed it into the net, and somebody tipped one, and somebody screened one, and somebody made a good play to him on one, and his partner, as I said, takes care of business 200 feet from the goalie.

On the personnel adjustments throughout the game:
I think after all the penalties in the first period it was a little bit disjointed with our lines, and once it was three-one, who they cut down to and who seemed to be more effective against certain players and who could be on the ice. We’re trying to win a game, not play favorites. I couldn’t care less if they played eight minutes or they played 25 minutes if we win.