Good afternoon from Denver, where it’s expected to rise to the low 60s on a spectacular, clear day. Notes from this morning’s skate:

-Drew Doughty and Jeff Carter took the option this morning, though all other active players were accounted for. Jonathan Quick left the ice first and is expected to start in net against Colorado. He earned first star honors by stopping 42 shots in Los Angeles’ 4-1 win at the Pepsi Center on February 18. These teams have one final meeting, Saturday, April 4 at Staples Center.

-Jamie McBain, Nick Shore and Andy Andreoff remained on the ice for extra work with Martin Jones. Given that Shore centered Kyle Clifford and Dustin Brown at practice yesterday, and Andreoff was part of a four-man consortium that also included Jordan Nolan, Jarret Stoll and Justin Williams, it appears most likely that Shore will dress in a game that happens to be in his hometown. For reference, forward lines shown Monday are here.

-Semyon Varlamov, the reigning second star of the week whose streak of 22 consecutive starts in net will come to an end one game shy of tying the franchise’s record, participated briefly in the morning skate but will not play tonight. Instead, Calvin Pickard, recalled on Monday from AHL-Lake Erie, will get the nod over Reto Berra. Pickard will make his 13th start of the season for the Avalanche; he has posted an impressive .936 save percentage over his previous 15 appearances.

-A reminder: tonight’s game is broadcast nationally by NBCSN. For live Kings coverage, Nick Nickson and Daryl Evans will broadcast the game live on KABC AM 790, beginning with the pre-game show at 5:30 p.m. The last FOX Sports West broadcast from Denver was January 22, 2013, the second game of the 2012-13 season.

-Give this article by Helene Elliott of the LA Times a read. She spoke with Wayne Gretzky, who doesn’t anticipate a formal return to the National Hockey League at this point. There are also some notes on the Red Army documentary. 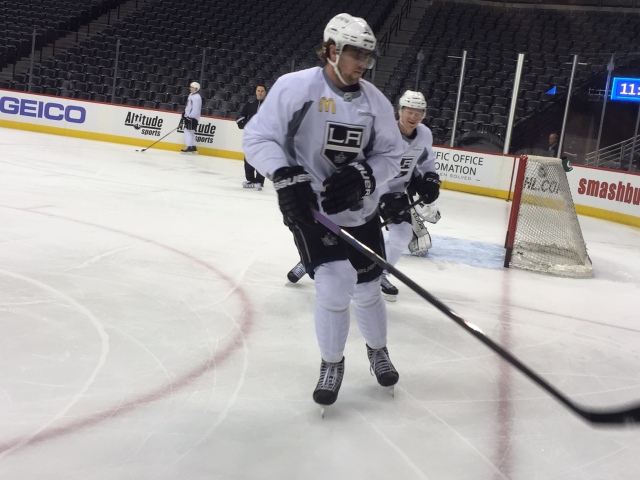