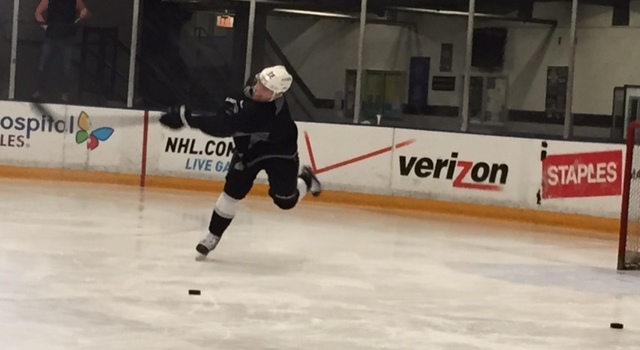 If you look even closer, you’ll see that the players took the ice in their skates. While most of the players removed their skates and left the facility after the team photo, injured skaters Tanner Pearson (broken lower fibula) and Alec Martinez (concussion-like symptoms) changed into black practice jerseys and took the ice for a light skate.

Pearson suffered a broken lower left fibula on January 10, so today’s on-ice session was one day shy of eight weeks from the day of his injury; the timetable for his recovery is three-plus months. According to General Manager Dean Lombardi, Pearson first took the ice last week to test his ankle, though that skate was mostly just to test how the skate felt on his foot. There is still some swelling, and he’s still feeling some discomfort when wearing the skate, so it’s not as if any type of return to a practice setting is imminent.

“Until they can have full practice and full contact, they’re basically outsiders,” Darryl Sutter said.

As of now, there’s no change from the window in which Pearson could be expected to return. That window is almost certainly in April. When asked shortly after the Andrej Sekera trade whether there was a chance that Pearson could return before the end of the regular season, Lombardi responded, “I think there’s a shot.” As he did that afternoon, Lombardi also noted on Friday the impressive ability for young athletes to recover from injury.

Martinez’s presence, on the other hand, does signal a step forward in his attempt to return from concussion-like symptoms brought about from a hit by Tampa Bay’s Cedric Paquette on February 7. As reported by Lisa Dillman and I on Tuesday, Martinez had to pass two consecutive hard days on a stationary bike before he’d be able to return to limited on-ice activities. Hockey operations expressed optimism last night when asked about Martinez’s progress; the defenseman’s presence on skates today signals that he has passed the bike test. Like Pearson, there is no clear timetable on his return, though today’s session should be seen as progress in his recovery.

Recovering Tanner Pearson on ice today. Team is off. pic.twitter.com/eHOpbSRr6O