Good morning from LAX, where the Kings (en route to Winnipeg) and Ducks (en route to Dallas) are about to depart. Notes from today’s practice:

-Instead of holding line rushes and flow drills, the Kings worked extensively on special teams situations before taking part in net-front compete drills. There was a good pace to the power play work. Jonathan Quick left the ice first, as expected. Tomorrow’s game is an afternoon game, so the #LAKingsGoalieTweetOff applies. Los Angeles won’t hold a morning skate in advance of tomorrow’s game, which begins at 3:00 p.m. local time.

-Robyn Regehr participated in practice a day after experiencing a scare when he was struck in the wrist/hand area by a puck in the third period of Friday’s loss to Anaheim. Regehr traveled down the tunnel to the Kings’ room as soon as play ended, after he helped bring about a whistle. “I was looking around for the puck – I was looking around the ice – and I looked down actually, and I saw the puck was wedged in between my arm and the elbow pad,” he said. “It was the first time that’s ever happened to me, so I left it in there until the whistle went, and then I kind of shook it free.” He said the area went numb; hey, he’s Robyn Regehr. He’s been numbed by blunt force before and has traveled down that tunnel many, many times. A stick tap to Lisa Dillman for the Regehr quotes.

-I’ll have a story up on Sekera’s impressions of his first 72 hours with the Kings; another story I’ll post today – assuming I’m able to stay awake on the plane – is about Brayden McNabb’s modest if mostly regular point production this season. The first-year King now has one goal and 18 points in 55 games after having scored his first goal since December 26, 2011. Of that goal in Buffalo’s 4-2 win over Washington, he recalled of his power play shot from the slot, “I closed my eyes and it went in.” 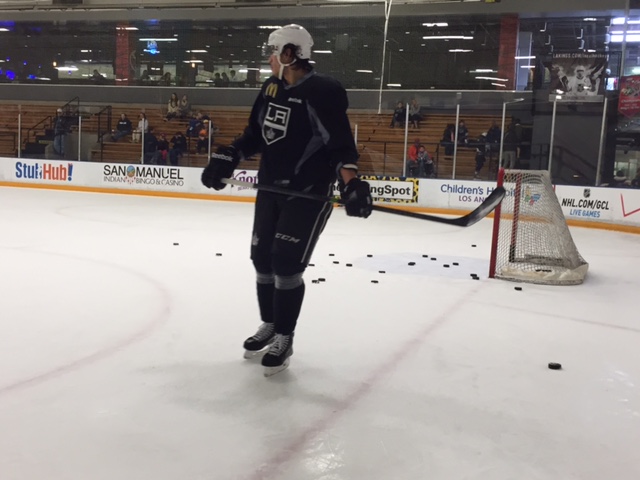