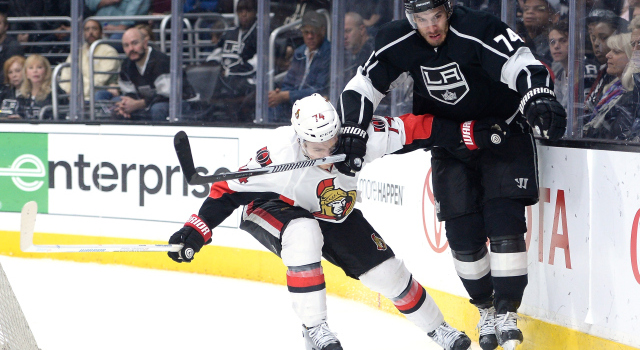 Tyler Toffoli, on his scoring chance in the final minute of the game:
Gabby made a nice play. It was in my hands. I couldn’t get it up.

Toffoli, on the difference between the teams in a high-tempo game:
I don’t think we played our best game. I thought we kind of lacked in a couple things, so we’ve got to regroup and be ready to play against a big team tomorrow.

Toffoli, on what he saw on Justin Williams’ disallowed goal:
I didn’t really see it, to be honest

Toffoli, on what “was lacking”:
Making short little plays and competing for loose pucks and second chances around the net.

Toffoli, on whether he knew anything about Andrew Hammond:
No. [Reporter: He’s a 27-year-old first year guy.] He played really well tonight.

Toffoli, on the importance of the Anaheim game:
Huge game, a division game. We’ve got to be ready to play a full 60 minutes tomorrow.

Dwight King, on the team’s performance:
We had our moments where we were in the zone and had some very good chances and didn’t capitalize on ‘em. We were sloppy for some parts and…we just couldn’t find a way to beat their goalie.

King, on whether the team generated its normal amount of scoring chances:
I think it’s tough to put it in context because obviously when you’re putting them in, you feel great even if you don’t get that many. I think tonight we had our fair share of looks. Their goalie was up to the task. We’ve just got to find ways to get to the rebounds. I’d say tonight was probably the big thing that there were quite a few kicking around. Just couldn’t get ‘em in.

King, on Justin Williams’ disallowed goal:
Not much to say. The ref sees what he sees and blows the whistle when he thought it was covered. Everybody else sees it a little different from different angles.

King, on the importance of tomorrow’s game against Anaheim:
It’s huge. Obviously a divisional game, big points on the line. If you want to go far in the playoffs you’ve got to go through divisional opponents, so we’ll put this one behind us and refocus for a big, heavy team tomorrow.

King, on the team’s defensive zone play:
Like I said, there were moments where we weren’t very good with the puck. At the end of the second, I think there were about four Grade-A [saves Jonathan Quick] had to make