Good afternoon from El Segundo. The Kings took the ice shortly before 10:30 a.m. this morning and showed these color-coded forward groups:

-In other words, there were no changes, other than Andreoff rotating through the Stoll line instead of the Shore line. All active players were on the ice, other than Alec Martinez. When I have an update on Martinez other than “he has been riding the stationary bike,” I’ll share it.

-It was a lengthy practice, as days that follow recovery days regularly are. Among other drills, the team worked on three-on-two zone entries and mini two-on-ones that originated from below the hash marks. After some players left the ice, a good portion of the team remained on for extra work, which included Kyle Clifford putting some time in on his fighting technique amongst other skill-related drills in smaller groups.

-Jonathan Quick was named the First Star of the week. “I’ve said it, and I’m not going to go any farther than that,” Darryl Sutter said. “If I have to pick a goaltender in a big game, I want Jonathan Quick, and we’re playing big games, so I want Jonathan Quick.” There seems to be an utterly pointless debate on Twitter that heats up about every six weeks or so on whether Quick is an “elite” goalie. This debate is not worth anyone’s time because A) there is no way to quantify “elite,” other than by using one’s one subjective criteria, B) there are no new, uncovered streams of data that have recently been mined, only recycled arguments that we’ve all heard before, and C) the only other person who could be considered in the same argument as Quick as the greatest goaltender in franchise history more or less holds him up as the greatest goaltender in franchise history. “I wish I would’ve set the bar a little higher,” Rogie Vachon said last year. Read Vachon’s and Quick’s quotes, and then imagine them laughing at the meaningless discussion of whether or not Jonathan Quick is “elite.” Bill Ranford analysis will come later today.

-A stick tap to Lake Forest for sharing this in the comments section of the links post this morning. It’s a 360-degree view of the Stadium Series game, and you can zoom in and out to find yourself. I remember a similar application being introduced for the Michigan-Notre Dame Under the Lights game in 2011, and realizing that I was staring blankly into space during one of the greatest (September) comebacks in college football history. Technology!

-Darryl Sutter tuned in to the Oscars at the most important part – right at the Best Actor, Best Actress, Best Director and Best Picture awards. “Hit it just right,” he said.

Lots more to come on a busy day from #gundo. 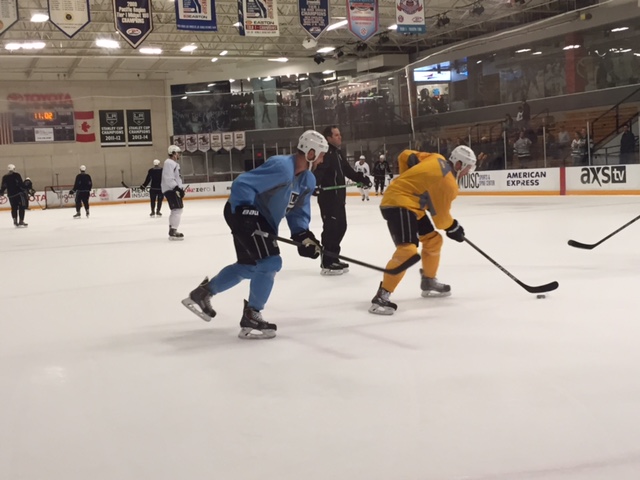