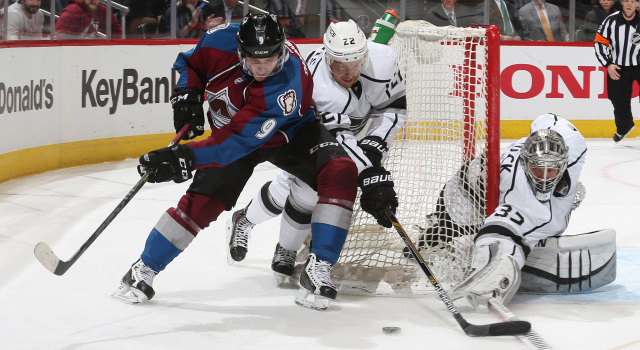 Jonathan Quick, on what has stood out during the six-game winning streak:
I don’t know. Nothing in particular, you know? I was asked the same question after the last win. I think we prepare the same way. Nothing that sticks out in particular.

Quick, on whether there’s any different feeling after a 42-save performance:
No. It’s two points, you know? You either feel good because you got two points, or you don’t.

Quick, on the penalty killing:
We got some clears when we needed it. I think the first period, we did spend two minutes in the zone, but (got) a lot of blocked shots, clearing out rebounds, things like that. The usual things that you need for your PK to be successful.

Quick, on whether he’s excited to play in front of 70,000 fans on Saturday:
You’re playing for two points. I think we’re tied with them right now in the standings. That’s the only thing you’re excited about. It’s going to be a playoff-type game. We know we’re fighting for a spot. That’s the only excitement. All that other stuff is for the fans. That’s not really for us.

Toffoli, on the importance of balanced scoring and unsung contributions:
It’s huge to have everybody playing well and everybody scoring. I think you look at the last game, Kopi with a huge goal, and we’re just finding ways to get goals at the right time.

Toffoli, on Jonathan Quick’s performance:
Yeah, Quickie made some huge saves for us, especially late there on that last power play they had. I mean, for us it’s no real huge surprise, like you guys said. But he had a huge game for us, and he stole the game for us.