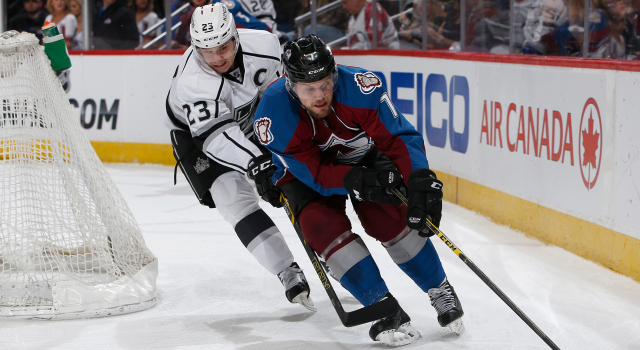 On whether Jonathan Quick kept the team in the game and allowed them to take control:
I think the two minute penalty kill in the first period was pretty important and Jonathan was a great penalty killer, but I think you have to give the penalty killers some credit too, not single one player out.

On what has turned the team’s penalty killing fortunes around:
Just trying to take it a game at a time. There’s lots that goes into penalty killing. Most of it comes down to guys taking just more purpose in it.

On whether back-to-back third period penalty kills represented a “critical juncture”:
No, I think when it was one-nothing in the first period and we killed it – we couldn’t get it out but we killed the penalty in our zone – was the most important part.

On the club’s balanced scoring:
You know, with the way the schedule is and the way the season is and the importance of every game, you need something out of everybody. It’s really hard to play guys who have only got five or six goals. We need more out of ‘em. If they’re going to play teen-minutes as forwards, you have to get more out of them, and what you’re seeing is some balance out of our forward group.

On whether he’s excited for the Stadium Series game:
I think we need to take a little break here and energize for that. I haven’t thought one minute other than I didn’t like them white pants the other day.

On what the team learned from last year’s Stadium Series game:
We played really well last year. We didn’t score a big goal against ‘em. We had a penalty shot and didn’t score, and we out-chanced them, and we have some guys that haven’t played in that game. Quite honest, what comes to mind is a guy like Matt Greene that didn’t play in that game. I’m more thinking about a veteran player like that than I am about anybody else. Hopefully the young players get the opportunity again. Not many teams get to play two years in a row, and our team might never get to play one again. That’s the only thing that I look at.