What has keyed the Kings’ recent surge? 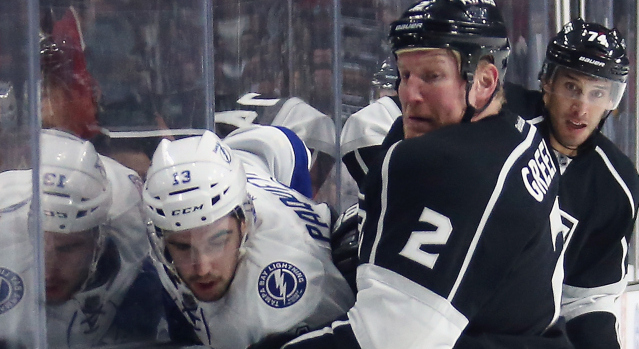 If you’re looking for a win that serves as an archetype of the Los Angeles Kings’ recent play, look no further than their 3-2 victory over the Tampa Bay Lightning Monday night.

In that game, the Kings killed two Lightning penalties (they’re 9-for-10 on their winning streak and 16-for-19 overall since the All-Star Break), they were shorthanded only twice (they’ve averaged 2.11 shorthanded situations since the break), they scored three goals (something they’ve done in all six post-break wins), and they out-shot their opponents 28-23 (they’ve emerged as the league’s top possession team and have averaged a +6.4 shot differential in the nine post-break games).

“We just have to play the right way,” said Matt Greene, and judging by the conversations I had with players on Tuesday, there’s confidence that they have been.

“I think we’re getting our game going, but at the same time we just have to eliminate the one or two big mistakes a game. That’s what was costing us in the past…The advanced stats, they’re good in terms of showing what you’re doing but they’re not the end-all, be-all. It’s what’s going on in a game and if you’re making a couple mistakes that are leading to Grade-A situations against, that’s going to cost you games.”

Recently it appears as though the Kings have been cutting down on the Grade-A chances against. Leading NHL analytics site War on Ice keeps a running tally of scoring chances – its criteria, while subjective, is explained here – and it’s clear that at even strength, Los Angeles has clamped down on the quality looks generated by the opposition. Whereas the Kings allowed 24.8 scoring chances per 60 minutes before the All-Star Break (again, by War on Ice’s criteria), in the nine games since the break that number has dropped to 21.7 chances against per 60 minutes.

“Yeah, we’ve gotten better defensively,” Jarret Stoll said. “We’ve gotten better below the goal line. How quick we’ve been, I think early on – maybe the first half of the season – we weren’t quick back there as defensemen, as centermen supporting the defensemen and therefore we were spending a little bit more time in our own zone. That’s tough playing in your own zone. It takes a toll on you and eventually it’s not going to be good. Yeah, we definitely got better in that aspect.

With less time spent in their own zone, the Kings’ traditionally strong possession habits have developed. There are also more post-game acknowledgements of checking well, and Jonathan Quick has been strong despite a current of play that has been more heavily directed towards him this season than in years past.

But, most importantly, the improvements the team has made have originated in their own zone.

“I’m sure you guys hear it from coach. That’s where it all starts for us,” Stoll said. “Maybe some teams aren’t like that, where they’re more of a run-and-gun, track meet, very high skilled team, but we don’t feel we’re that team. We feel we’re a good defensive team. If we’re going to make the playoffs, we have to even be better defensively I think and cut down our goals against even more. We had a tough stretch there where we spent a lot of time in our own zone and gave up a lot of goals. So it’s no secret, I don’t think.”

Matt Greene, on what allowed them to have success against Tampa Bay:
Just having the puck and having a good possession game. I think limiting their chances. You’ve got a high octane team like that, it’s a good challenge to show up and make sure you get the job done.

Greene, on whether he feels that the scoring chances against are down:
I couldn’t tell you that…I haven’t seen anything. It’s just a matter of comfort. If you’re breaking out clean and you’re spending some good time in the O-zone, then you know your possession game is strong.

Jarret Stoll, on whether it ‘s more difficult to make the playoffs this year:
It’s a totally different year. It’s a totally different league. Teams are a lot different. It gets harder every year. There are more and more teams in the race every year it seems like. I think in years past, to get that seventh or eighth seed, we had three or four teams. Now, there are more teams that are right there. We all know the last 25 games of the season, 30 games of the season, how many three point games there are. Making up ground is tough and making up three, five, six points is tough. You’ve got to put a streak together. I said it a long time ago, if you want to make the playoffs you have to have at least one good winning streak during the course of the season, maybe two and then be consistent throughout that. I think that will get you in the playoffs. If you don’t get that, obviously you’re not playing consistent enough, but you’re not going to make it.

Stoll, on whether their five-game win streak is their best stretch of the season:
I think we’re just looking at our game and our structure – the way we’re playing, the intensity, the physical play, the timely goals, the timely saves – that’s what has been successful for us in the past. We’re not looking at the winning streak. If we play this way, we should win games and we know that. Four or five-game win streak, whatever, it doesn’t really matter to us. We have to get points and we know that if we don’t play that we that we’ve been playing lately, we’re not going to get those points. That’s kind of our mindset, I think.