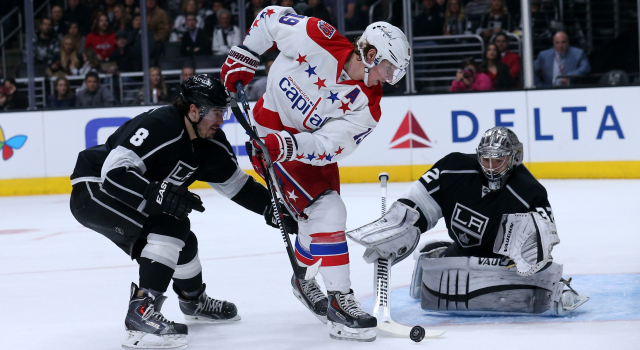 The Kings canceled practice Sunday – some players were surprised when they learned of the cancellation last night – roughly 13 hours after Saturday night’s 3-1 victory over the Washington Capitals. Darryl Sutter was pained and reflective when addressing passing of Steve Montador, a player he coached in Calgary and maintained a strong relationship with. I’ll share some of Sutter’s fondness of Montador this afternoon; before then, here are Kings-centric quotes on a quiet day in between important games against Washington and Tampa Bay.

On Drew Doughty weathering physical play and shot blocks last night:
Eight there, Ovechkin hit him – hit him in the hand. He hit him with a shot, that off-side. When somebody shoots off-side, you’re not ready for it usually. Drew wasn’t ready for that. And then he got hit in the foot. [Reporter: He’s relatively OK?] Oh, yeah, he’s fine. [Reporter: Never ‘OK,’ ‘OK enough?’] He’s fine.

On any encouragement over Brayden McNabb’s recent performances:
Hey, if we’re going to make the playoffs, he’s going to have to because there’s nobody else, quite honest. I know we keep going back to guys like that, but you know what? They’ve been given an opportunity that they wouldn’t have gotten anywhere else, so either they do or they don’t. I’m not basing it on one or two games because we need him to be consistent. He can’t be after the next one, take him out of the lineup. He’s got to be a physical player, and he’s got to be a mistake-free player. I mean, he’s got to play a little bit more over the last two games because Robyn’s still at 60%. Those guys like Brayden and those kids should just go spend three days with Robyn and they’d be a better player, right away. Robyn’s playing something 20 minutes right now because we have to. [Reporter: I got sick like that one time and I couldn’t get off my couch.] He’s had more IV in him the last four days, I mean, between every period, friggin’, we’re having meetings and he’s laying there like he’s Hawkeye. I was saying Robyn, can you hear me in there? He’s goin’ ‘yeah.’ Friggin’ bags coming out of him. You know what? Just got to run its course on him, but he’s doing better. He was the first one last night who got back to me because I called him the night before and I said, ‘You don’t have to be here in the morning. Just come to the game,’ but he doesn’t feel right doing that.

On Nashville’s acquisitions of Cody Franson and Mike Santorelli:
I guess teams will want to give up a first rounder for an unrestricted player. That’s what they did. He started his career there, so I’m sure they were allowed to see if he wanted to go there. He liked it there. He left because of contract, and when you look at it, he’s getting traded because of contract, and will they be able to keep him?…It’s that time of the year where teams are giving up…Nashville’s obviously picking – they’d have to go to the finals – 25-to-30 in the first round, so obviously they felt that’s worth giving up.”