Call for urgency, “making it happen” sounded by Doughty 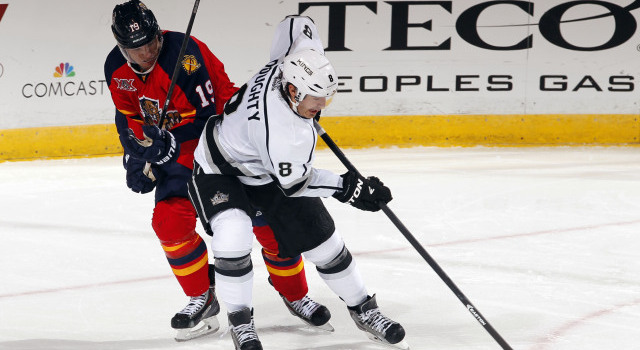 On whether it helps having the experience of making a playoff push:
Yeah, it helps but sometimes maybe we’re relying on that. We just think it’s going to happen rather than going out there and making it happen. I know the guys are really determined to win this game tonight. Every single guy just needs to have their best game. If every single guy on our team plays well, we’re a good team together and we know that it. It just comes down to individually being prepared to play, yourself.

On the challenges he faced as a teenage rookie:
First year in the league, it’s pretty tough. You come from junior, playing against guys your own age, and then you’re all of a sudden playing guys 10 years older than you and are way stronger. They’re way faster and you can’t underestimate any single guy on the ice because they’re all NHL players, they all have a lot of talent. It’s obviously a tough adjustment, but from what I hear, he’s been doing really well with it. He’s supposed to be a really good young player.

On whether there are positive signs from the team:
Well, I think our game against Chicago is easy to look back on and take a lot of good things from that game. They’re one of the best teams in the league. I still think, personally, they’re the best team in the league. We played a very good game against them. We were down pretty much the whole game and came back in the third period. That just shows our courage and determination to win. We’re never going to give up, but we need to bring that to every single game not just big matchups like that.