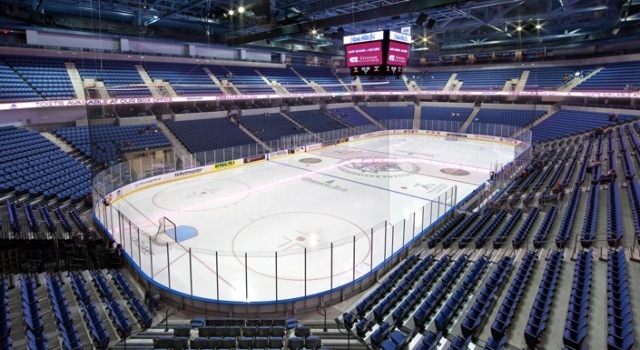 The American Hockey League is absorbing more of a westward balance beginning in the 2015-16 season, when the Los Angeles Kings, Anaheim Ducks, Calgary Flames, Edmonton Oilers and San Jose Sharks will place their club’s highest affiliates in California markets.

Via the AHL, as revealed in today’s press conference in San Jose:

At this point, there is no timetable on next year’s schedule or how the divisions will be realigned.

The reason behind the westward shift is due to West Coast teams wanting to be closer to their top affiliates, making call-ups, player evaluation and development much easier. Previously, when Rob Blake, the general manager of the team’s current top affiliate, wanted a firsthand look at the team’s top prospects, he would have had to take two flights and use an entire day to get between Los Angeles and Manchester, N.H. There was a built in advantage for teams in eastern markets, especially for a team like the Boston Bruins, whose prospects were a 90-minute drive or train ride away in Providence, R.I. With this move, the Kings will be able to make a roster move the day of a home game and expect the player recalled to be in the lineup after a 60-to-90-minute drive.

For context, this season there are no AHL teams west of the Central Time Zone. One team is based in the Newfoundland Time Zone, 22 teams are based in the Eastern Time Zone, and seven teams are based in the Central Time Zone. Previously Calgary’s affiliate had been in Abbotsford, B.C., but the lack of interest of a Flames farm club in Canucks territory amidst an oversaturated market and costs affiliated with extensive travel led to the Flames’ relocation of their top prospects to Glens Falls, New York.

Yesterday I spoke with AEG Sports Chief Operating Officer Kelly Cheeseman, who provided information related to the move west. Keep in mind that while the framework of the move west has been completed, many of the details are still in the “infantile stage” and are still a ways away from being finalized.

-The Manchester Monarchs, the club’s AHL affiliate through the conclusion of this season, will remain an affiliate at the ECHL level. Think of it as the Reign and Monarchs flip-flopping levels of affiliation. Both teams’ rosters will be wholly different; Ontario’s roster next year will be much more similar to what Manchester’s roster is this season. Also, keep in mind that ECHL teams rotate only three forward lines, not four.

-This has been a project that has been in the works for years. Even earlier today, Darryl Sutter said that when he was the general manager in Calgary that he and Brian Burke, who was Vancouver’s general manager at the time, had discussed the possibilities of bringing more teams west, but “at that time we couldn’t get any of these teams in California to be involved in it.” Right now, with the Kings having won the Stanley Cup in two of the last three seasons, and the Ducks having won the Cup in 2007, and all three California teams in strong shape competitively, and with the “Gretzky Effect” leading to more rinks and greater participation in the sport at all levels over the last 25 years, the growth of the game in this region makes this the right time for westward migration. This was something emphasized by Cheeseman – that the growth of the game on the West Coast is so important. Three teams with legitimate claims to the Stanley Cup and five new high level affiliates in the state is very good for the health of the game in California.

-The Kings will retain ownership of the Manchester Monarchs and will now fully own the AHL’s Ontario Reign. Previously the Kemp family – Justin Kemp currently serves as the Reign’s president – had owned a portion of the Reign and managed day-to-day operations of the club. Darren Abbott, currently the Monarchs’ President / Governor, will become the President of the Reign while retaining his role as Governor with the Monarchs. Matt Welch, currently the Monarchs’ Executive Vice President, will take over the day-to-day command of business operations in Manchester.

-The Reign will unveil new jerseys in the coming weeks. There will be a brand new jersey and logo redesign. Cheeseman noted the strength of the Reign’s outreach and presence in the Inland Empire, saying, “The team has done a good job of building the Ontario Reign brand, and we want to keep that legacy.” The Monarchs, who ditched purple and gold for a new silver and black color scheme this season, will not have new jerseys.

-The scheduling process is just starting. The announcement of AHL divisional realignment is likely coming during the off-season. Via Pierre LeBrun today, there is the possibility that the California teams could play fewer games. It will be interesting to see how a potential unbalanced schedule scenario develops.

-There are still lots of moving parts. Part of the reason this project has been so long in the making is that there were a bevy of hurdles to clear that were related to ownership – some AHL/ECHL teams were owned by NHL teams, and some were owned by families and private owners – as well as complications due to arena leases. Today’s announcement is the culmination of years of work, and from my understanding, there is still a good chance more teams will relocate their top farm affiliates to the west over the coming years.

-Dwight King is one of four Kings – Kyle Clifford, Jordan Nolan and Martin Jones are the others – to have played for both the Reign and the Monarchs. “I think it’s great,” he said of the AHL/ECHL swap. “As far as Ontario goes, they have a nice facility – brand new, nicely equipped. The fan base when I was there was great – if not full, near full, every night – and I think that’s what players want to play in front of. I think for the players, I think it’s a lot easier for travel and location.” My sense, given the conversations I had in Manchester last season with players who played for both the Reign and Monarchs was that players really liked playing in Ontario. Players also enjoyed playing in Manchester – and this notion is unrelated to their high thoughts on New Hampshire’s largest city – but given the weather, the lifestyle and the local fandom in Ontario, those I spoke with were very high on the time they spent in the Inland Empire. “It’s obviously a little different,” King said. “Playing hockey in California is pretty rare. So when you get the opportunity, I don’t think anyone is going to be disappointed no matter what city they’re in.”

AHL President and CEO, David Andrews:
Relocating five teams is a complex process, and we are very excited to have brought this initiative to a successful outcome. The Western-based NHL clubs have been in dialogue with our league for almost three years, and today’s announcement launches a new era for the American Hockey League and for professional hockey in California.”

Los Angeles Kings President of Business Operations, Luc Robitaille:
This is a wonderful growth opportunity for the game of hockey in the Western region and it will have a tremendous impact for years to come. I want to commend each of the participating clubs, along with Dave Andrews, Bill Daly and Gary Bettman, for their commitment, patience and willingness to work through a very challenging but worthwhile process in order to get to this day.

San Jose Sharks Chief Operating Officer John Tortora:
The immense growth of the game of hockey in the state of California shows that hockey fans here love the game and they support it. Having our top prospects playing on the same coast as our National Hockey League team will greatly enhance our ability to monitor and enhance their development. The creation of this Pacific Division of the American Hockey League has been a long time in the making and is the result of an immense amount of hard work by the AHL, the NHL and the five Pacific Division teams. We are extremely excited to have this division become a reality and we can’t wait for October 2015.