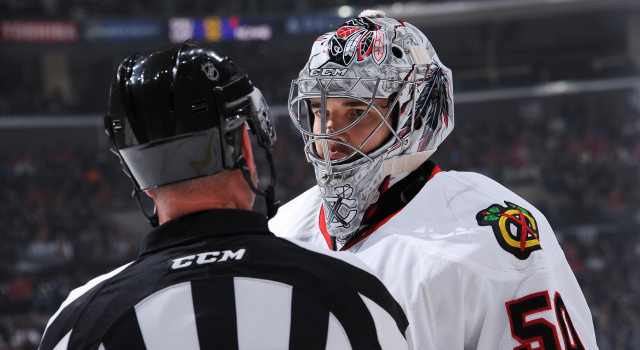 Jonathan Toews, on whether they played too defensive in the third period:
I don’t think so. The two situations where they did score, we weren’t defensive enough. I don’t think we let off the gas, or stopped working. We just made some mistakes that ended up in our own net.

Toews, on whether it was tough to get into the game after the All-Star break:
Not in a game like this, I think the guys showed up. They were prepared, ready and we knew it was going to be a tough game. We hung in there. It was looking pretty good for us with that 3-2 lead late in the third, and then found a way to blow it.

Corey Crawford, on the game:
It sucks. I mean, it’s frustrating. I thought we played a good game. We give up two quick ones at the end. I guess everyone can pretty much tell how we feel about that one. So there is no point in explaining it.

Patrick Kane, on whether he wanted to see more from the power play:
You obviously want to score on every power play. I thought we were moving it around pretty well. Had some chances, had some looks, scored a nice goal to give us the lead there. Then after that, I think there were kind of a couple calls that maybe could have been made. Sharpie got his stick slashed at the end of the game. When the stick breaks usually you see a penalty there. Seabs gets called for putting his hand on the puck and they did it right before that. So I think maybe they were playing catch up after we got a few power plays and evened the score a little bit. Some things you can really worry about. You have to worry about what actually happens in the game and what we can control. It would have been nice to see a few more opportunities and cash in a little bit.

Kane, on whether he felt a sense of urgency from Los Angeles:
That’s a good team. Anytime you come in here, no matter where they are in the standings, it’s going to be a tough game. I don’t think we looked at them as an easy team, especially because they’re out of the playoffs. We’ve had some great battles with this team over the years. Their crowd was into it and they had good fight back there. It seems like that team does it a lot.

Joel Quenneville, on the loss:
We finished with doing it the right way. We had a perfect spot. We had a perfect third period going. We don’t get the puck out when we should have got it clearly out. They let the momentum back on that play and [they] scored off the faceoff. It was definitely a tough loss.

Quenneville, on whether Los Angeles played desperate:
It seems like every time we play them, that’s the type of game that’s out there. It’s a hard game, it’s fast, it’s quick and things happen. We just had to look through a couple of plays there that we can’t give up those type of goals.