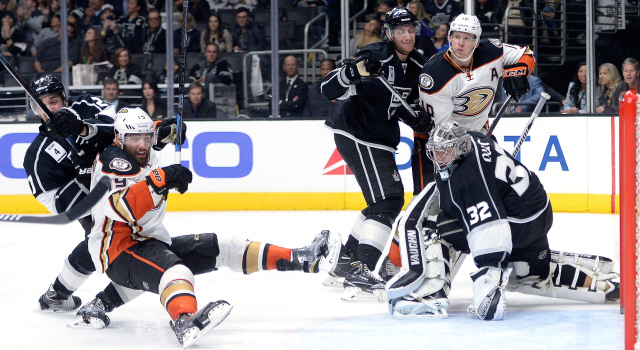 On whether the game was more emotional because of the pre-game ceremony:
No. [Reporter: Were the guys a little more amped up at all, a little extra motivation?] I’m sure that would be motivation…but I don’t think that would affect how we’d play at all. I thought we played really well.

On whether Kings and Ducks games bring out the best in both teams:
I think we for the most part liked our team. I couldn’t tell you about them. You’d have to ask them that.

On how the Kings can improve special teams other than being able to “score more”:
On special teams? Well, there’s two special teams. One’s power play and one’s penalty kill. So we scored a power play goal and they scored a power play goal. The percentages in the league, I know how much you watch the games, the percentages are in the league, if you’re a good power play, you’re around 20%. So that’s one in five. So if you can figure out how to get one or two percent better, then that’s what you do. [Reporter: What have you guys been doing to get one or two percent better?] We’ve sort of been at the top all year.

On the three games between the Kings and Ducks that advanced past regulation:
Yeah, I know, what is it, one overtime, two shootouts? Probably how close it is when it comes down to it. [Reporter: The numbers say that these two teams are even in a lot of aspects, but obviously they’re on top of the division right now. Do you see any difference?] They’re scoring the big goal, for sure. We’re probably really close. Again, it’s those percentage points and goals against, but we have to continue to work at that. That has to be, obviously, the foundation of our game, and I thought Jonathan was our best player tonight, and it’s good to see.

On Nick Shore:
I thought he was all right.