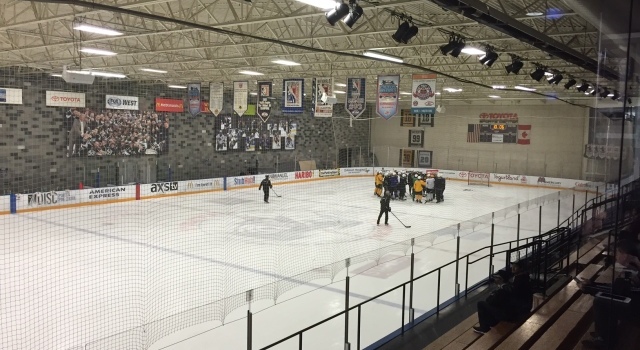 -There was another lengthy skate today, though the actual practice and skill development time on the ice didn’t quite match yesterday’s marathon session. The Kings worked on their transition game, amongst other drills, and finished practice with some shootout work.

-Changes! Enter Nick Shore. His NHL debut could come alongside Dwight King and Jeff Carter. “I haven’t really thought about it too much,” Shore said. “I guess we’ll approach that when it comes. But if I happen to be in the lineup, it’s going to be my first. It’s going to be a really cool experience. Obviously I have a little nerves going for that, but let’s see how it goes.”

-More changes! Marian Gaborik and Anze Kopitar welcomed familiar line partner Justin Williams, King and Carter surrounded Shore, and Trevor Lewis skated to the right of Dustin Brown and Jarret Stoll. Who plays center on the fourth line could also change, though we’ll have to wait until tomorrow’s line rushes at the morning skate to get a clearer indication.

-Robyn Regehr skated again, as did Tyler Toffoli. Toffoli will get an ultrasound on his spleen today after getting some blood work done yesterday; he’s not expected back in the near future. There’s a chance Regehr could play against Anaheim. “We’ll see what tomorrow brings,” Darryl Sutter said. “He’s better every day, and he’s fully cleared, so he’s been practicing all his game situations now, so I guess it’s whether he feels he’s ready.”

-With Rob Blake’s #4 heading up into the rafters tomorrow, you’ll want to be in your seats by 6:30 p.m. With the pre-game ceremony, tomorrow’s puck drop has been pushed back to 8:08 p.m.