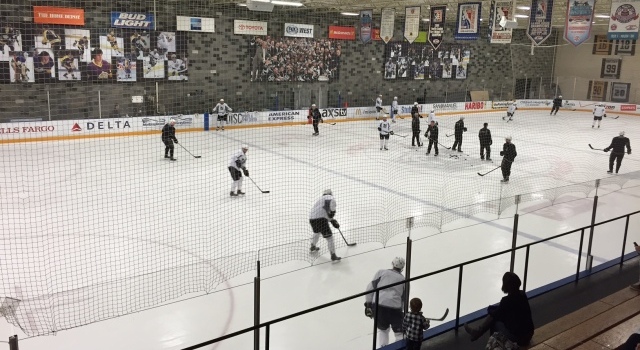 Good morning from El Segundo, where the Kings skated in advance of their game tonight against the New Jersey Devils (7:30 p.m. / FOX Sports West).

-Martin Jones left the ice first, so he’s expected to draw the start against the Devils.

-Nick Shore and Jamie McBain remained on the ice for extra work with Robyn Regehr and Jonathan Quick, so it appears Shore will have to wait at least one more game to make his NHL debut. As Darryl Sutter said on Monday, “He’s going to play.”

-Tyler Toffoli skated for roughly 10 minutes for the second consecutive day. Before he took the ice he said he wasn’t feeling any major effects from mononucleosis. While that’s a good sign, he’s still expected to miss three or four weeks.

-I added it to the story last night, but for more context on the contract negotiations between Justin Williams and the Kings, click here for Pierre LeBrun’s ESPN.com Rumblings Blog update from yesterday, which contains quotes from Williams’ agent, Thane Campbell. As noted previously, I’ve been told that negotiations between Williams and the Kings are still in their early stages. July 1 is still a ways away.

-There’s a lot more to come throughout the day: I’ll have stories on Drew Doughty discussing his All-Star assistant captaincy, the impact Rob Blake has left on younger defensemen, and impressions of a New Jersey Devils team that will make its second appearance at Staples Center since Game 6 of the 2012 Stanley Cup Final. Bear with a short delay before Darryl Sutter quotes are posted, as I’ll be working with FOX Sports West to record this year’s batch of prospect profiles. Stay tuned…