Pearson fractures fibula; Shore to be called up 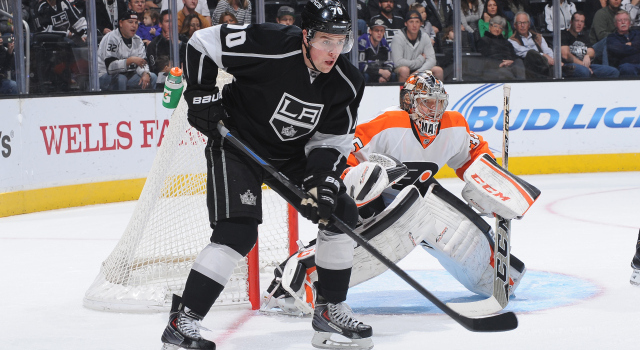 As noted last night when I reported that Tanner Pearson suffered a fracture in his lower leg, it wasn’t clear at the time whether the fracture occurred in the ankle or someplace higher. More information has come to light this morning, and a team spokesman passed along the news that the official nature of the injury is a “fractured fibula”. The fibula, compared to the tibia, is the more slender of the two bones that form the leg.

No roster moves have been made yet, but the Kings have started the wheels in motion to place Pearson on injured reserve and recall center Nick Shore from AHL-Manchester. Shore, who ranks second in the American Hockey League with 41 points (20-21=41), was selected in the third round, 82nd overall, in 2011 and has the reputation of being an intelligent two-way player. His brother, Drew, was traded by Florida to the Calgary Flames on Friday, so it’s possible that a brother-versus-brother game could be in the cards later this season.

Though Tyler Toffoli has been diagnosed with mononucleosis, no roster move to replace him will be made immediately. One candidate for a call-up would have been Brian O’Neill, though the 26-year-old who leads the AHL with 43 points (10-33=43) – the Kings actually have three of the top four AHL scorers, including Jordan Weal – had two fingers stepped on in the Monarchs’ 6-1 win over the Binghamton Senators last night and is expected to be sidelined for two weeks.

There is no timetable for Pearson’s or Toffoli’s return. While we were juniors at Michigan, Michael Cammalleri was diagnosed with mononucleosis and missed slightly over a month. Kelly Hrudey also battled “an adult form of mononucleosis” shortly after being traded to Los Angeles in the 1989-90 season.