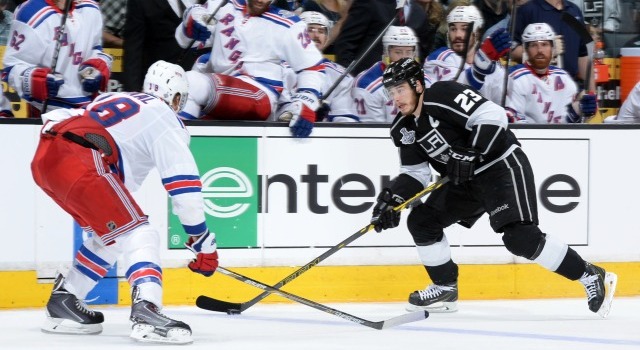 So you may have heard: the Los Angeles Kings are playing the New York Rangers tonight. It’s the first meeting of the season between the teams that met in last season’s Stanley Cup Final.

While it’s generally more interesting when the winning team visits the losing team’s rink, it’s still a significant moment in the season as the Rangers return to the site where Alec Martinez and the Kings defeated them in double overtime in perhaps the most tense environment Staples Center has ever witnessed.

Not surprisingly, the focus Los Angeles places on tonight’s game is getting two points and continuing to refine the team’s game and overall direction of the season. Look elsewhere if you’re hoping for any bulletin board-style material.

Dustin Brown, on whether the Rangers will play with extra emotion:
That’s a question for them really. I think each year guys reset their mindsets. I don’t think anything carries over.

Brown, on how the Rangers provide a challenge:
Yeah, I think they’ve been a top team in the league for a few years now. It’s just about us really. We haven’t played as well as we liked and it’s an opportunity to get better tonight.

Brown, on what the team could be better at tonight:
I mean all areas of our game can improve. So it’s not one thing here, one thing there. It’s just improving our game overall.

Brown, on whether it feels like six months since winning the Stanley Cup:
I remember it clearly, but we’ve played a lot of hockey since then too.

Brown, on whether it was strange playing New Jersey for the first time 17 months after the Stanley Cup:
Not really. I think it’s probably more of something for you guys to write about than it is for us to think about.

Brown, on whether this game was circled on the calendar:
No.

Alec Martinez, on facing the Rangers for the first time since winning the Stanley Cup:
I think that’s more of a story for the media. We approach this game just like we approach every other game, essentially, against a top opponent. As far as I’m concerned, that’s in the past. We’re just focusing on getting a win tonight.

Martinez, on the Rangers being one of the hottest teams in the league:
Like I said, you’ve got to come well prepared against a team like this. They’re playing really well and they’re a pretty good hockey club. We know firsthand, having played them last year. We’ve just got to come out and try to take the focus on our game and play better than we’ve been playing.

Martinez, on whether he anticipates extra emotion from the Rangers:
I don’t know, maybe. But like I said, they’re playing really well and they’re going to bring it regardless of whether we played them in the finals or not. We’ve got to come prepared.

Martinez, on facing New Jersey for the first time 17 months after the 2012 Stanley Cup Final:
Like I said, I think it’s more of something for the media story. I don’t think we really put much emphasis on that. Like I said, they’re a really good hockey club and they’re playing well and we’re going to approach just as if we played them in the finals or not.

Matt Greene, on whether it was strange to face New Jersey for the first time 17 months after the 2012 Stanley Cup Final:
No, not at all. I think you, over the course of the season, it’s tough to circle a date that’s 40 games into it. You’ve got to gear up for every game and you’re focus is on who you’re playing that night. Tonight, you guys are reminding us that this is what happened back in June. But in terms of us, you have to be ready for whoever you’re playing that night and not looking past anybody and being ready for the task at hand.

Greene, on whether winning the Stanley Cup is still fresh in his mind:
It seems like forever ago. The season is long. You’re gearing up for who you’re playing that night and that’s it. That’s a distant memory right now. … You can always remember it. But in terms of what else is happening in between that stuff , there has been a lot of stuff.

Greene, on whether any rivalry has been established with the Rangers:
They’re huge, they’re a great team right now. Right now, we’re definitely looking forward to the fact that they’ve won 10 of the last 11 and 11 of the last 12. I think we’re more aware of that than what happened in June. They’re playing some good hockey right now.