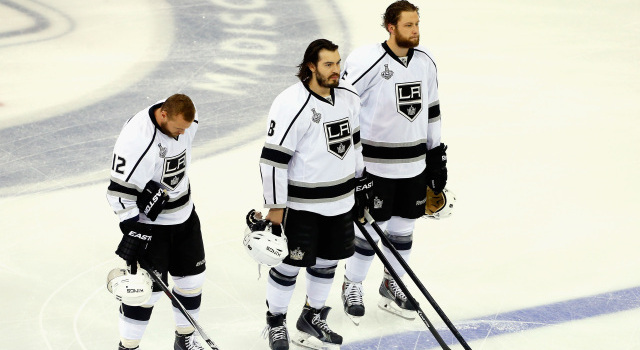 Drew Doughty, on whether he is still lobbying to be used in the shootout:
I am. I want the game on my stick whenever it can be, to be on it. I’m a defenseman, so maybe don’t see me as a good shootout guy. But I feel like I can still put the puck in the net in those opportunities. I better score if I get that chance.

Doughty, on the possibility of being paired with Jake Muzzin at the All-Star Game:
That’d be cool. I don’t know if that will happen, but that’d be good. I think me and Muzz have had our ups and downs this season. I feel like we’ve been playing well together, maybe not getting the bounces last game. I think one day, that might happen. We’re going to keep working on getting better together and hopefully be a top pair in the league again.

Doughty, on the last three days of practice:
Oh, this was huge. I loved it. I absolutely enjoyed this time off. We’ve been working hard this year. We really have been. It’s not easy playing in the NHL. It’s tough on the body, both mentally and physically. To be able to get a rest and just relax at home, go to the beach, hit some golf balls, whatever it might be just to get some time off and relax and get your mind off the game of hockey. It’s so important to do and I love that time off there.

Marian Gaborik, on whether minor and junior hockey in Slovakia is on the rise:
I would almost say the opposite lately. The last few years, it really hasn’t been what it should [be] in terms of the youth growing and stuff. But obviously third place shows that we still can progress and have some good young players come up in the future. We should continue and put more effort and money into youth hockey and just grow it.

Gaborik, on Slovakia beating the Czech Republic at World Juniors:
It’s always a rivalry against those guys. Every game, especially that quarterfinal game there, it was huge for us to win that game.

Gaborik, on the possibility of being named an All-Star:
I don’t really follow it. I haven’t really thought about it. They have a lot to choose from. That wasn’t on my mind at all.

Gaborik, on Darryl Sutter coaching an All-Star team:
I’m sure a lot of guys would enjoy to play for him from other teams. It’s always fun for coaching and for players. I always had a great time, but it wasn’t on my mind at all.

Jake Muzzin, on whether he will be an All-Star:
I don’t think so. I think there are a lot of other guys who would get looked before Muzz would get looked [Editor: I referenced “Muzz” in the third person, so he responded in the third person], but who knows. I didn’t know that [the Kings’ staff will work the All-Star Game] until you guys just told me. It’s exciting for them to go there, be a part of that All-Star stuff, and they deserve it. That’s good.

Muzzin, on this being the first All-Star Game since 2012:
I didn’t notice that. I haven’t been around long enough to notice that.

Muzzin, on whether he watched the All-Star Game as a kid:
I think, not when I was little, but more when I was into hockey a little bit older. Then you’d watch all the best players in the league get to play in one game. When we were younger, it was exciting to watch. I remember Dany Heatley had five goals in the one All-Star Game and that was like ‘This guy is sick.’ That was a long time ago. It’s an exciting weekend for everyone, I guess.