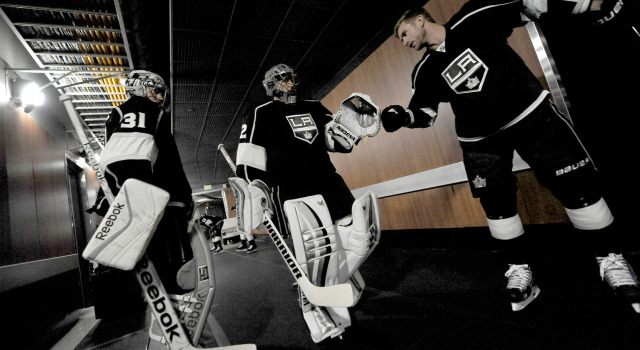 When the Los Angeles Kings traveled to Dallas to begin a three-game road trip on November 22, they carried with them the distinction of having the best goaltending tandem, statistically speaking, in the National Hockey League. At that time, Jonathan Quick and Martin Jones had combined to stop 93.5% of all shots faced.

Since Quick and Jones’ torrid starts to the season – the due stopped 93.8% of all shots in October – the club’s goaltending has cooled. Including the 5-4 loss to the Stars on November 22, Kings goalies are 8-7-5 with a 2.68 goals-against average and .887 save percentage over the last 20 games. Los Angeles is now tied for 10th in the league with a .913 save percentage.

Darryl Sutter, on the break in the schedule allowing goaltenders to get work in:
We think we have great goaltending, and we need ‘em to play great, and that’s both. Our schedule in December was one that even though it was the most games we played, it was also, in terms of how it was set up – in terms of the days off and all that – was the easiest month for goalies. You know what? We need’ em game ready, and we need ‘em to be thinking that they’re in that .950 save percentage, and that should be in practice, too. When you drop below .920 in the league, you’re just getting average goaltending, when you look at it, when you go through it. It used to be .900 was good, which meant nine out of 10…but that’s not [any]more. If you look at the teams that have both goalies in that .920-plus range, they’re the top end. That’s a high standard, but that is what’s real. That’s today’s game, when you look at it. I mean, if you just go top 10 teams and do bottom 10 teams, it’ll jump right out at you.

Let’s look at those top-10 and bottom-10 teams, based on points percentages:

Given that the team’s goaltending is spearheaded by a Conn Smythe Trophy winner who is one of the league’s elite presences in net, there’s the likelihood that the team’s save percentage is due for a rebound. But after a game in which the team allowed seven goals on 25 shots – as it did in an overtime loss to Nashville – there appears to be an added urgency behind Sutter’s request.