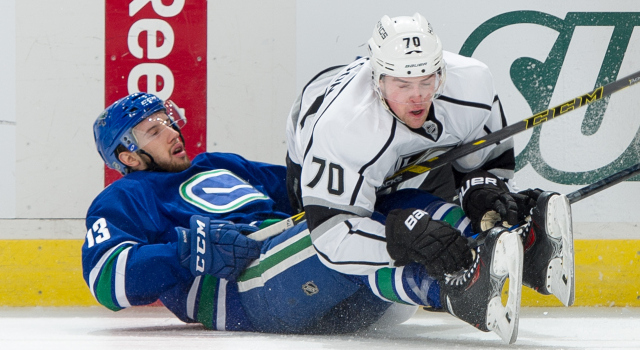 Tanner Pearson, on his assist on Jarret Stoll’s game winning goal:
I saw, I think it was, Marty up top and then I saw Stollie come off the bench. Luckily it went through his legs and got to him and he made a good shot on it.

Pearson, on the importance of earning the win:
Yeah. I think, especially when you look at the standings and two and three and how the wildcards are, you want to get points. I think it’s good for our hockey club to get them on the road right now too.

Pearson, on any push to remain on a line with Jeff Carter and Tyler Toffoli:
No. I think obviously we had chemistry to start the year. Before the game we were obviously talking about it and we want to get back to that kind of game. I think we did a good job of that tonight, especially in the first period. Towards the end of the game, the lines were kind of mixed up but we got the win which is key.

Pearson, on what the team wants to accomplish on the upcoming home stand:
Obviously, we want to get as many points as possible. I think we’re pretty comfortable playing at home. Hopefully we can get a bit of a gap going into the All-star break.

Pearson, on the team’s performance:
I think it was a pretty gutsy effort from the guys. Obviously we haven’t been that strong of a team on the road. To come back in the third period like we did tonight was, I think, a big thing for our hockey club.

Pearson, on the tying and winning goals being scored within one minute:
It’s how hockey can go. When me, Lew and Toff were going onto the ice Darryl said this is a big shift. You’re really just trying to keep the puck out of your net being in a tight game and lo and behold we end up burying one.

Jonathan Quick, whether the win was especially important:
It’s always important to get points. They all count the same. We were able to get the two and now we head home and we have to get two there now.

Quick, on what stuck out to him about their game:
We were down, so obviously they’re trying to prevent chance and we’re trying to create chances. We were down most of the game obviously because they scored early. They got their second one early in the second there. We were just trying to create chances. We created a lot and we were able to get two at the end of the game there to kind of pull one out.

Quick, on what makes the team good in the third period:
I don’t know. We’re a good team. Obviously good teams play well at points of the game where it matters. I don’t think it’s any secret or anything. We’re a good hockey team and we’re going to fight to the end.