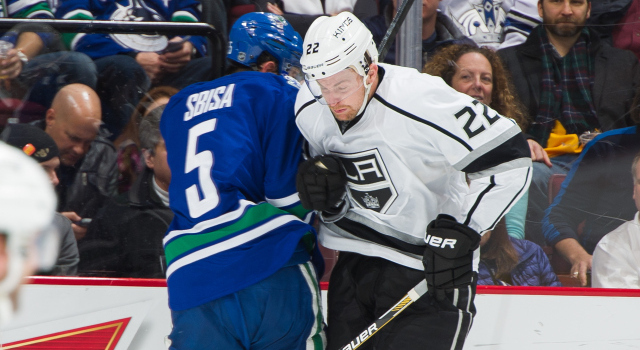 On whether he was happy with a strong 60-minute effort and earning the win:
Yes. [Reporter: What was it that you liked most about the game?] I think we played the whole game. It reminded me of some of the other games we played lately where it’s basically a two-to-three-to-one shot totals, and hopefully you can stay with it, stay in it. The fourth line – Mike and Kinger and Cliffy – had a couple of really strong forecheck shifts in the second, and Stolly’s line too, and I think we got a goal off it. It’s a big difference going into the third down one or down two.

On earning a late power play and taking advantage:
Getting the penalty called on them I thought was important because I thought there was one just prior to that that we didn’t get for us. In a two-on-one game, you need that break. I think both goals were short side goals, but we made really good plays to keep pucks in even though one was a power play goal – Willie’s goal – they’re almost five-on-five plays, right, where guys make plays on the wall. I think Greener on one and Drew on the other made good plays to keep pucks in on the wall, and obviously good shots by Willie, short side high, and then Jarret short side high.

On Tanner Pearson’s “dirty work” on Jarret Stoll’s game winner:
Yeah, he made a good pass. I think we kept the puck in and he was strong on the boards. We were strong on the boards all night. It was just whether you were going to look up early because we had a lot of good chances in the first period, especially the first five or six minutes. ‘Whoa, goin’ through that again.’

On whether this game was a relief to win, given the team’s road struggles:
Well, it’s [inaudible] because we don’t have the wins for it. I know when you don’t watch us all the time you’re just going to look at the stat and say that, right? But the effort in that, I’ve never had any issue with that, or any part. If you look at how close the games – other than two or three this year – how close and low scoring they’ve been, quite honest, that’s the way the division is. I mean, I’m sure they’re frustrated because they had a two-nothing lead, but that’s all the division is. It’s so close, and it comes down to a big play or a bad goal or something almost every night.