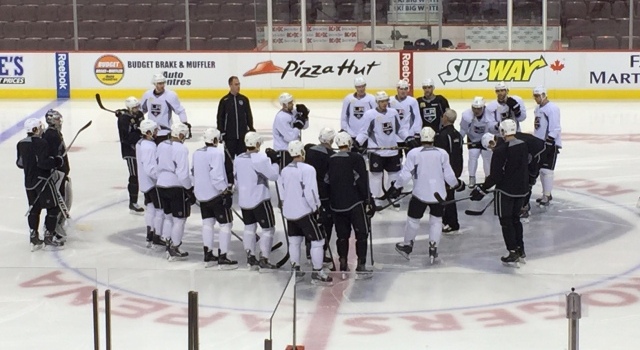 A very happy New Year to you, Insiders. The Kings were back to work this morning at Rogers Arena, where the first rotation through line rush-type-drills didn’t provide enough substance to confidently project tonight’s alignment.

Everyone on for the AM skate; line rushes were more or less a random number generator; not that confident what we saw will be what we get.

-It’s possible that there may be an adjustment on the back end. “Tonight we’ll make a decision,” Darryl Sutter said of the defense. “One of ’em’s banged up a little. Put em all in warm-ups, see how it goes.” Jordan Nolan remained on for extra work with Martin Jones, so Nolan appears to be out, while Jones is the projected back-up in net. Jonathan Quick left the ice first and is projected to start. Projections.

-From the other dressing room, the Canucks are expected to ice a forward group of D. Sedin – H. Sedin – Vrbata, Higgins – Bonino – Hansen, Matthias – Richardson – Vey, Burrows – Horvat – Dorsett. On defense, Dan Hamhuis is out with a lower-body injury.

Zack Kassian on being healthy scratch tonite: "He obviously doesn't see me fitting in right now and that's a coach's decision." #Canucks