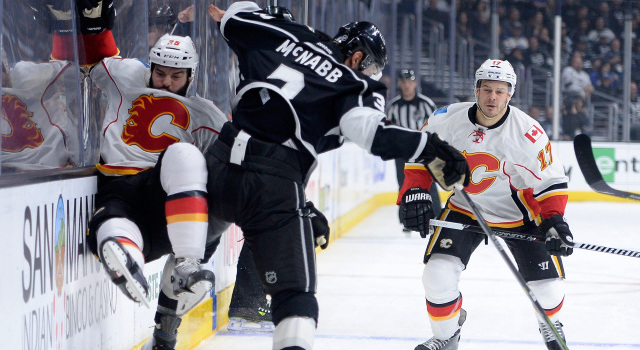 I had an interesting conversation with Darryl Sutter today about Brayden McNabb, whose open ice hits within a short radius of the right wing boards in the Kings’ defending zone have drawn quite a few gasps from both home and away crowds.

“Obviously you want to play, but I haven’t been playing as good as I need to be and taking a step back and watching the game,” he said. “It can help and hopefully it will help going forward here.”

He said he wants to continue “being good in my own end, be firm on the puck and making smart plays.”

“When you do that, everything will take care of itself,” he said.”

Per Darryl Sutter, McNabb “hasn’t played on a good team, and that’s a big difference.”

“I think the management of the game, depending on score, is a big difference between…playing from behind or playing with the lead. There’s a big difference in how defensemen play. I know how you expect them to play. A lot of it is poise, and a lot of it is move past experience because when you’re surrounded by guys who have been down the path and have had success, then you have to absorb more of that quickly. He’s been in a good position for us, Brayden. You know what? He’s gotten to play more than probably what he expected and probably more than what we expected. We’ve had to use nine defensemen this year, and he’s one of nine.”

Sutter agreed that there were some similarities to when Jake Muzzin was vying to solidify a regular role with the club in the 2012-13 season.

“They both only play the left side,” Sutter said. “Muzz played a lot early – he played a lot with Drew, which meant he played against everybody’s best players, and when we moved him so he was playing against lesser players, so there’s probably a lot of similarities. The difference would be Muzz played in playoffs that year, too, and that was a big step for him, and he couldn’t play every game then, either. That was the step for Muzzin. It was not that season. The step for Muzzin was that playoff, and he had a tough time against Chicago, and I think he learned a lot and he wanted to be a better player.”

McNabb is a coachable player – he captained the Kootenay Ice to a WHL championship in 2011 – though Sutter was quick to add that the NHL is “not anything else.”

In the long run, the blue line’s subtractions due to injuries (Muzzin, Martinez, Regehr) and suspensions (Voynov) have provided an opportunity for McNabb to showcase and refine his abilities over a longer time frame.

McNabb, on Kootenay teammate Matt Fraser, who will make his Edmonton debut:
He’s a natural goal scorer. He’s got a great shot. He worked on it a lot in junior and it’s obviously paid off in the American league and if he gets himself a decent chance here, I’m sure he’ll find himself a good role. [Reporter: Is he a physical guy? The games I’ve seen of him in Boston, he seems to be running around.] Yeah, for sure. Even like his 17-18 year old year, he knows his role when he’s got to play it and he’s a smart kid. He can play a few different roles and if he needs to do that, he will.