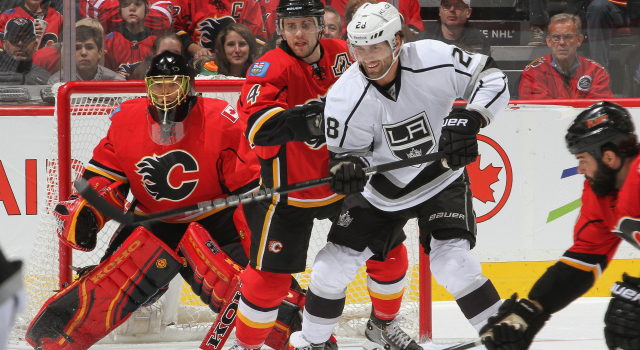 On whether the Kings were done in by “lapses”:
No, they scored two goals in a minute with pucks that started below their goal lines.

On the Kings out-attempting Calgary 69-34:
I don’t know what they were. Is that what it was? [Reporter: Yeah. The amount of the attack, has it been something consistent over the last several weeks? Happy about the possession and level of attack?] No. We lost the game.

On Jeff Schultz’s performance:
I thought he played a safe game early, and I thought he got better as the game went on. We were looking for a little more poise and experience on our back end, and Brayden’s been struggling, so we thought it was better he watched the game. It wasn’t so much who went in, it was who we took out.

On Jeff Carter playing despite experiencing flu-like symptoms:
I thought he gutted it out. Didn’t have much in the tank. Thankful we had him in the lineup. He’s been really good for us, and I’m sure he’s going to say he had a hard time tonight, but he gutted it out. That’s what he does. The tough part for him is the next couple days.

On whether the Kings deserved “a better fate”:
I don’t know. I mean, usually we get a lot of shots from our defensemen. I think going into the third we had one. They scored two goals in a minute. The Flames are a fast team, a good team. They get the puck out of their zone in a hurry, and on both those goals they did. We know that, and we didn’t take that away from them, and they scored two goals because of it.