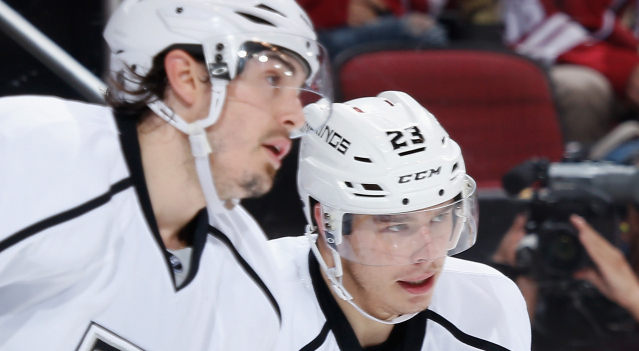 Given the circumstances of Calgary’s come-from-behind win in Los Angeles last Monday and Johnny Gaudreau’s First Star honor, there were naturally quite a few questions asked in the Kings’ room about how the team would respond tonight on the road against a plucky opponent.

Dustin Brown, on the Calgary Flames:
They’re a small, speedy team. If you let them hang around, they have the ability and the skill level to manufacture goals pretty quickly. It’s more about just playing hard for the full 60 minutes.

Brown, on whether they have a better understanding of Johnny Gaudreau:
You get to know players a little bit better. Everyone is talking about Gaudreau and I think the second goal of the game was a really good goal, a really good play by him. That showed his skill level and his speed in and around the net. If you look at the other two, especially the first one, it’s a great block that goes right on his stick. I think chances are, over time, we’ll give that up. It’s not about one guy on their team. It’s about our team bringing it four lines, six D and a goalie.

Brown, on any feeling of wanting revenge, similar to the St. Louis home-and-home:
People want to make it that way. It’s a divisional game either way. At the end of the day, it’s two points that we need. That’s what I think is our biggest motivating factor. It’s not that we blew a lead last time we were against them. It’s about we need to points right now. At the end of the day, it’s actually a four-point game for us.

Brown, on the team’s approach to the three-game trip:
Well, we all understand that it’s three divisional games. So that’s 12 points. But as players, maybe you’d have to ask other guys. Three in four, I’d rather play than practice.

Drew Doughty, on how Calgary’s comeback last week affects tonight’s game:
Yeah, I think we played well for a majority of that game. We dominated, but we had a lapse at the end there. We know these guys can put pucks in the net. They have a lot of firepower up front. They’re a good rush team. Their D are good and join the rush. We can never think they’re out of a game. They’re always hungry and we’ve got to win tonight.

Doughty, on how he approaches playing against Gaudreau:
He’s quick down low. He’s a small guy that’s good at avoiding checks. You just have to play tight on him, don’t give him a lot of room. If you get to him before he’s able to make a move, you can pin him. He’s a little lighter than most players. It might be a little easier to pin him, but he’s so good at getting away from it that you can’t give him room. We know what to expect from him now. Maybe we underestimated him a little bit in the first game, but not anymore.

Doughty, on whether he was surprised by Gaudreau’s speed:
There are so many guys around the league like that. I guess it’s what we expected and what we were told by our coaches about him. He got a couple lucky bounces against us to go into the net. But he’s a good player and we have to spend special attention to him, he’s on their top line, and shut him down.