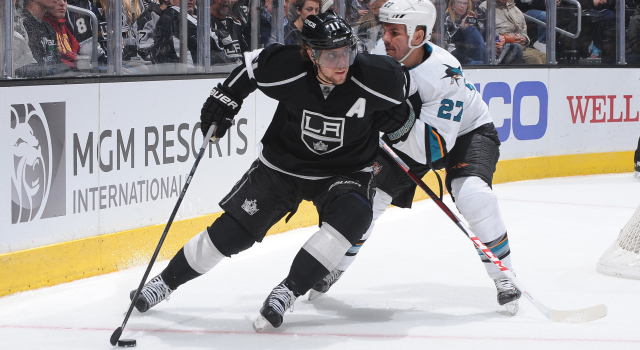 Drew Doughty, on the team’s performance in the first game out of the Christmas break:
The team played well tonight. I think everyone, every line, every defenseman, I think everyone played well. That’s what we need. We need to be able to roll four lines, roll six D, and that’s how we’re going to win games. We win games by playing good defense. That’s, I think, a lot of the reason why we won tonight.

Doughty, on holding San Jose to one goal:
Yeah, they score a lot of goals. They’ve got a lot of firepower up front, and even their D is good at putting up offensive numbers as well. Especially on their power play – their power play is very good. We did a good job of staying out of the box for the first couple periods, and then we had to kill off some big ones late in the second and in the third period, and that was huge as well.

Doughty, on what the Kings did well in five-on-five play:
We did well. We really focused on being better in the neutral zone and on our rush coverage. Turning pucks over from there, and then making plays, and then getting in on the forecheck, or if you have a rush, make plays on the rush. I think both were really well done and the power play stepped up for us too, which is huge.

Anze Kopitar, on whether this was the type of game the Kings are looking to play:
Yeah, I think so. We need special teams to play like we did tonight. I think it’s just a puck management and puck possession game. That’s the biggest thing for us. If we manage the puck good up the ice, it’s usually resulting in our possession in the offensive zone, and we can create chances off that. I thought we did a pretty good job of that tonight.

Kopitar, on limiting San Jose’s scoring chances:
Yeah…we’ve been known to play like that. Even though we were up a couple goals, you just want to keep on going. Everybody says the best defense is offense, anyway, so if you keep the puck away from them, you keep it to yourself, it’s the best thing to do, and when they do get the puck, Darryl’s been preaching on checking a lot lately, so I thought we did a good job of that, too.

Kopitar, on scoring a goal and generating chances with his linemates:
It’s coming along right now. It seems like we’re making some good plays and we’re getting some opportunities. Even in the first we didn’t score, but we had some chances off the rush. We’re building up the chemistry and we’re getting to know each other – those small details on the ice. That’s why we’re creating chances.