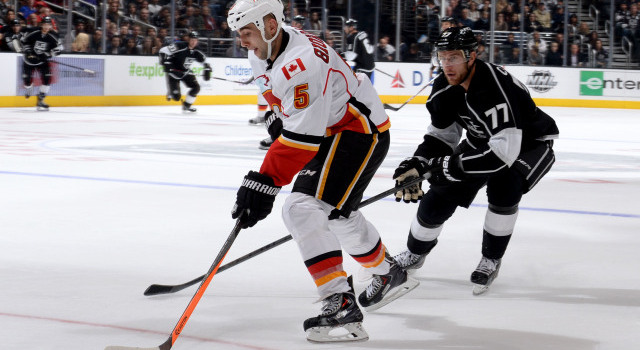 The Calgary Flames enter the final game before the Christmas break trying to salvage what until recently had been a Cinderella rise towards the top of the Pacific Division standings.

But a 0-7-1 stretch has left the club right in the thick of the Western Conference’s glut of teams that haven’t separated themselves from the pack, for better or worse.

The Flames were not considered to be among those with the most legitimate claims of a playoff spot, at least according to many pundits before the season started. Is it a surprise that (despite their recent plunge) they’re still right in the thick of the (early) playoff race?

“Probably, yeah. I think that they’d be a surprise team, yes,” Kopitar said. “But you look at their team and there is a lot of skill. Their defense corps is as good as anybody in the league. Once you scout them a little bit more, maybe it’s not really that big of a surprise. They have solid goaltending and they’ve been getting production from everybody. That’s usually the key to being in the spot they’re in now and tonight we’re going to try to knock them off.”

The Flames average as many goals per game as the Ducks – and would have placed above their divisional rivals if not for the 13 goals on 245 shots during their eight-game slide. Eventually they’ll pick up the pace from their recent 5.3% shooting percentage.

But the defense that Kopitar mentioned contains two very important names in Mark Giordano and T.J. Brodie. Giordano, the captain, leads all NHL defensemen with 32 points (9-23=32), while Brodie, who was signed to a five-year, $23.25M extension in October, is an offensive playmaker with quality puck possession credentials early in his career. The 24-year-old has six goals, 23 points and a plus-15 rating and was a late-game hero for the Flames in one of their two visits to Staples Center last season.

“Usually they skate themselves out of trouble,” Kopitar said while recognizing the duo’s playmaking ability, speed and quickness. “Obviously you have to know where they are on the ice when they’re on the ice because I think Giordano is leading the league in scoring by a defenseman. Obviously that’s a big exclamation point. You’ve got to know where he is and Brodie is just a solid defenseman that makes plays and you’ve got to play him hard.”

Darryl Sutter, who originally signed Giordano to a three-year entry level contract while the defenseman was mulling over an offer to play Canadian intercollegiate hockey after his junior eligibility expired in 2004, spoke of the defenseman’s growth.

“He’s getting recognition now because of numbers,” he said. “I think if you go around the league everybody knows who he is. Now it’s media attention. He’s been a top-four defenseman since after his entry-level contract. He’s a top defenseman in the league. I mean, he was a legitimate contender for the Olympic team last year, and he’s a good captain, all those things. Shows up every night.”

There’s an interesting story of Giordano’s signing. It involves Darryl Sutter and Michael Futa, and it’s worth your time.

From the Calgary Herald:

As an old, dues-paying member of the defenceman’s union himself, Playfair vividly remembers seeing Giordano for the first time, at a summer rookie-development camp that maybe a dozen defencemen attended. So much about the blueliner jumped out at him.

“I remember watching Gio, Richie Regehr and Steve Marr. And you know what, two or three days in, Darryl (Sutter) asks me: ‘Who do you like?’ And I said, remember this clear as day: ‘Giordano. He’s got great skill. Great feet. Once he gets in condition, I think he has a real chance.’

“Darryl met with three or four of those kids and gave them all the same contracts: Three years in the American League, and if you works out for you, you’ve got a career. Gio took it and ran with it.”

Anze Kopitar, on anything that stands out as part of his play last week:
Not really. It’s just try to ride the wave as long as you can obviously. It’s just pretty much play like I normally play. Obviously the last couple of games, things have been going well. The bounces have come. Now we just have to build on them and I think tonight is obviously a big game for us standings-wise and points-wise. We want to finish this off on the right note before we have this little break. It’s just thinking about the game and doing the things that will help us win.

Kopitar, on whether there was one play in particular that sparked his offensive output:
Yeah, I guess so. I don’t know, sometimes that’s what happens. I just started feeling good in the St. Louis game and started making some plays. The game just kind of slowed down a bit and you can see the game, see the ice a little bit better and away you go.