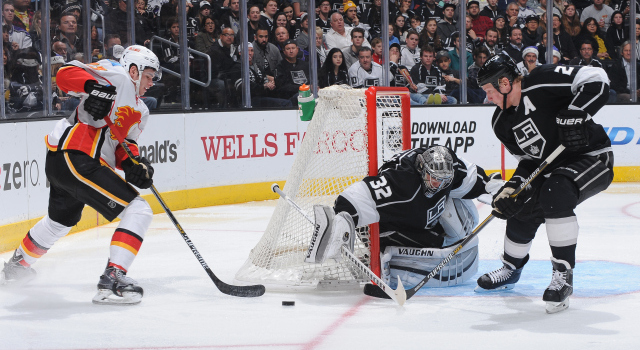 Matt Greene, on the overtime loss:
We just stopped playing before the game was over, let ‘em back into it. They took advantage of it. That’s it. Can’t lose those games. It’s all on us.

Greene, on whether players started thinking about the impending break:
It’s just bad hockey on our part. That’s all it is. It’s just mistakes, and that’s it.

Greene, on Calgary having a history of coming from behind:
That doesn’t matter what they do against other teams. It [matters] how we’re doing and how we’re playing. We’ve got to be better.

Greene, on the team’s inability to capture momentum heading into the break:
It’s always frustrating losing a game like that. That’s unacceptable. Guys that should know better.

Dustin Brown, on what has worked well for the power play:
Well, I think that top unit’s clicking on all cylinders – Carts, Gabby and Kop. That’s the biggest part of it, is they’re finding some chemistry and moving the puck really well. The other two, variations on power [play], depending on who’s going. It’s a pretty simple game. Just get shots and people to the net.

Brown, on whether the team let up late in the game:
I mean, we had control of the game from a scoreboard standpoint. They started rushing, having a five-man rush, and found two goals. It’s not something we normally give up.

Brown, on Brandon Bollig’s hit on Anze Kopitar, and whether Kopitar is getting hit more often:
I actually didn’t see the hit because it was so close to the bench. I was at the far end. Good players – just like we’re trying to target the others best players physically – Kopi’s going to be challenged physically like that every night, and he’s been able to manage, deal with it his whole career.