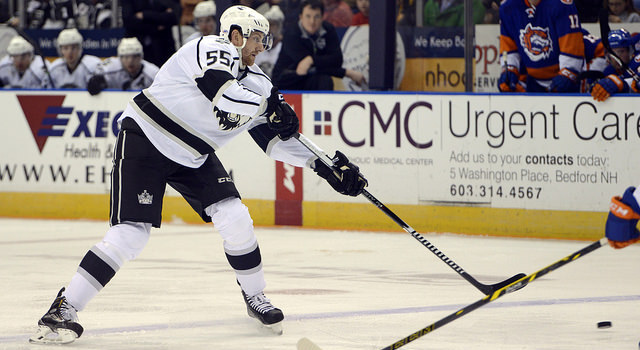 Andy Andreoff and Jeff Schultz returned to Los Angeles from Manchester over the weekend and took part in this morning’s skate. For Andreoff, his return followed a two-week conditioning assignment in which he skated on a line with leading scorers Brian O’Neill (9-26=35) and Nick Shore (15-17=32), posting five goals and 10 points in seven games and helping contribute to O’Neill’s AHL Player of the Week campaign.

“I had a little chemistry with Shoresie and [O’Neill] from last year, so it was nice to get back with them in the lineup,” Andreoff said.

Schultz, who was recalled on Saturday and skated in warm-ups prior to Los Angeles’ 4-2 home win over Arizona, recognized the “big strides” made by his defensive partner for the better part of his time in the organization, prospect Colin Miller.

“He kind of knows what to expect out of the league and out of the teams we’re playing now,” Schultz said. “You can see that confidence in his game.”

Because they remained on the ice for extra work with Jordan Nolan and Martin Jones, neither are expected to play tonight against the Calgary Flames.

Andy Andreoff, on Brian O’Neill being named the AHL Player of the Week:
Yeah, he’s been on fire lately. He’s a really smart, hardworking forward. It was definitely nice to be on a line with him.

Andreoff, on his conditioning assignment:
I think it was the right thing to do at that point. I didn’t play the whole month of November. I know bag skating keeps you in shape and everything, but it’s not the same. It’s not the same as game shape. It was nice to actually get in a game there, a couple games down in Manchester.

Andreoff, on circumstances leading to his conditioning assignment:
It was just the whole not playing in a game for a while. I was a little rusty at the start. But once I got a couple games under my belt I felt pretty comfortable down there.

Andreoff, on any differences in Manchester with Mike Stothers as the new coach:
A little different, Stuttsy is a great coach down there. It seems like guys like him and he keeps the team pretty close. I had a great two weeks with him. He treated me well down there. It was nice to finally meet him and get to play with him.

Jeff Schultz, on being on the verge of making his regular season debut with the Kings:
It’s a little strange, but that’s the way things work. We’ve got other guys that have filled that role and I’m lucky enough to be called up.

Schultz, on whether he knows how long he will remain on the roster:
I don’t know. I haven’t really been told anything. Like I was saying here, I just got a text from Rob Blake the night Robyn got hurt that said ‘We’re calling you up.’ I came up on Friday and just kind of been going day-by-day here. But I’m heading back to Manchester tonight just for Christmas and coming back on the 26th.

Schultz, on his “relaxed” attitude:
I think it has kind of evolved. We can only control the things we can control and the business side of hockey, we leave that to management. All I can do is go out there and work hard. If my name is called, go out there and step in.

Schultz, on whether he serves as an extension of the coaching staff in Manchester:
Yeah, the development team came down and just kind of asked me if we could do a couple extra things with them. But it seems like this year we’re even younger or have a few more younger guys than we did last year. I think it’s a good mix. There is a couple more older guys, kind of my age that have started helping the young guys and the young guys look up to them. Another good group and I think everybody is a year older, some of the guys that were first year guys last year are a year older. Every game they’re getting better.