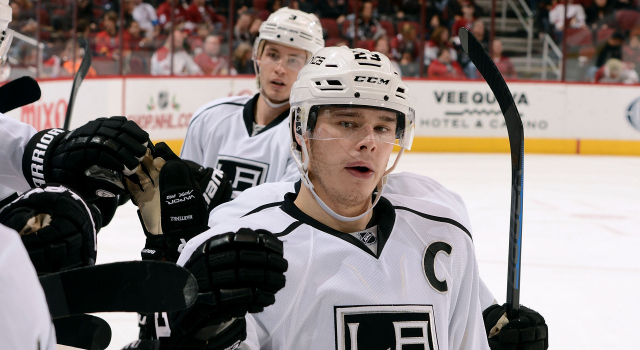 We all know that the National Hockey League is a Three-Two League, and recently, the Los Angeles Kings have done a good job holding up the “three” part of it. They’ve averaged 3.05 goals per game over their last 19 games and will take a team shooting percentage a full point better than last year’s into tomorrow afternoon’s game against the Arizona Coyotes. From an offensive standpoint, they’ve been rolling lately.

But the Kings are also allowing a few more goals here and there than year’s Jennings Trophy-pace. Opponents have averaged 2.77 goals per game over their last 13 games, a somewhat inflated number that could be loosely tied to the team’s penalty killing percentage, which dropped below 80% on the year last night.

The higher scoring hockey hasn’t come from any real change in the pace of play, according to Dustin Brown.

“I think hockey is a funny game, really,” he said. “Look at Kinger’s goal last night. It’s just a bounce that we don’t ever get. There are games where we throw 50 shots on goal or 40 shots on goal and can’t find a way to find the back of the net. It’s just trying to push through that and when you stick with it, you see what happens.”

It appears as though the uptick in regular season offense is due in part to a raised shooting percentage, goaltending that has leveled off after a stellar start to the season, special teams percentages with a more offensive bent than last season, and that the Kings are allowing 3.5 more shots on goal per game in 2014-15 (29.7) than they did in 2013-14 (26.2) while shots for have remained mostly even.

Dustin Brown, on whether the team’s shooting percentage and shooting luck is rising to the mean:
It’s hard to look at, from a goal scoring standpoint, a set of games – five to 10 games – because you go through a stretch where you’re not scoring at all. We’ve done that before and then we’ve exploded for a bunch of goals. Again, it’s trying to figure it out. The goal scoring, it’s bearing down when you have chances and just going after it really.

Brown, on whether the defensive play was more effective last night:
I think our PK can be better. Our reads are maybe a half-second late. As a result, they’re making some plays on us. But I think our compete is where it needs to be in those hard areas. Maybe look at some of the goals, they were just shot tips and it’s just a matter of finding that second layer and being harder on those second layer guys.