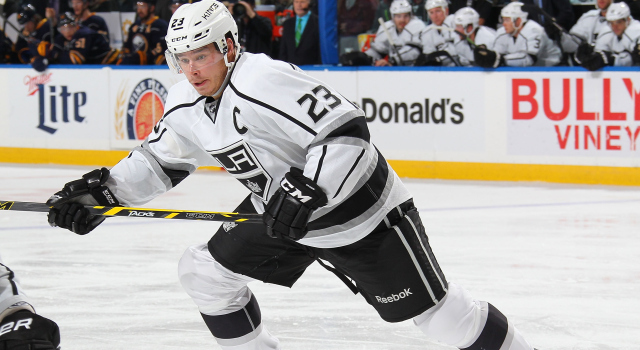 On whether the Kings have been challenged more with the puck or without the puck:
I think it’s more without the puck right now. What makes us good is our D-zone coverage and our defensive game, our checking game, whatever you want to call it. We’re really good at getting the puck back and closing gaps quickly. Right now, we’re a half-second late everywhere. As a result we’re playing more D-zone, which means we have the puck less. When we have the puck, we’re pretty good.

On how last year’s playoff road performance affects their mindset after the road trip:
Last year doesn’t come into play at all really in our mindset. It’s just frustrating, but it’s something you have to work through it individually and as a group. I know there are a lot of players who are in there frustrated, personally. Again, it’s about finding a way to push through together and that’s what this group has shown over the years. We’re capable of leaning on each other when we need to.

On surrendering three goals in two and a half minutes in the third period:
I don’t know the stats, but we’re pretty good at protecting momentum. But to give up back-to-back, penalty, PK goals… That’s another thing, when we’re good on our PK generally our five-on-five is really good. Again, it’s about trying to push through that because we are struggling.

On whether Jori Lehtera is a typical St. Louis forward:
Yeah, big, strong and skilled. That’s what good teams do. We’ve done it with finding guys that can come up and play. They’re no different.