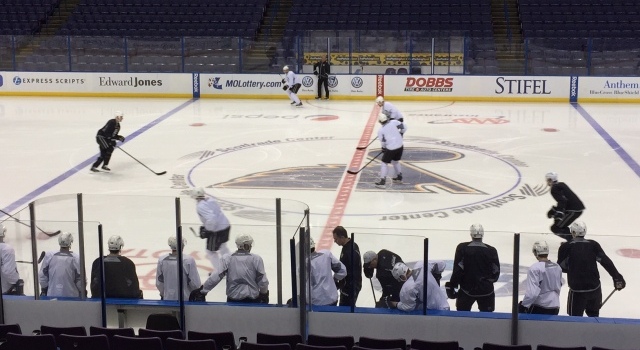 Good morning from St. Louis, where the Kings recently completed their morning skate at the Scottrade Center.

There were changes to the forward groupings. Via line rushes:

-I was paying closer attention to the forward alignment, though we may see some changes defensively as well. I caught Robyn Regehr skating with Alec Martinez and Brayden McNabb skating with Matt Greene, so I’m not projecting any changes. But as the line rushes evolved, there was some mixing and matching defensively (though that may have been to simply get Jamie McBain several rotations). It’ll be worth keeping an eye on as the game progresses.

-Martin Jones remained on the ice to work with Jordan Nolan, McBain and the assistant coaches, so that group isn’t likely to see action tonight.

-I’ll have several stories up later today on Anze Kopitar and Tyler Toffoli in addition to the game preview. Darryl Sutter wasn’t available to chat today, so there won’t be any coach quotes. Lots more to come…