The View from Toronto 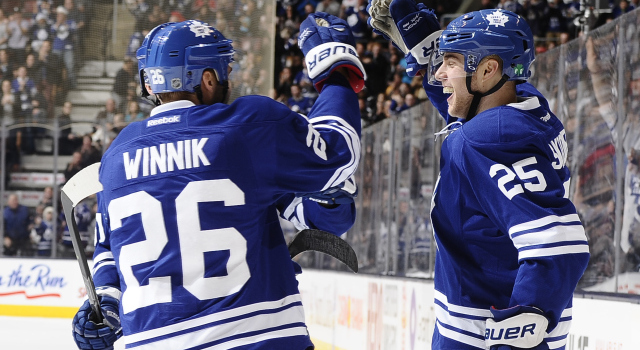 “Instead of deflating and tightening and losing confidence, the Leafs replied to L.A.’s challenge by playing a robust third period, tying the game 3-3 on a James van Riemsdyk power-play goal and winning 4-3 in a shootout thanks to Joffrey Lupul’s lone goal and James Reimer’s trio of shootout saves.”

“They beat the Stanley Cup champion Los Angeles Kings , who were rested in Toronto while the Leafs were on the second of back-to-back games.”

“Against the Kings, it was an entertaining, if slightly erratic, evening that saw the Leafs build a 2-0 lead, fall behind 3-2 just a little more than a minute into the third period then battle back to force the extra time.”

“It is a group of new leaders, not necessarily wearing Cs and As. You see it in Mike Santorelli, in Daniel Winnik, in David Booth, in Stephane Robidas, in players who weren’t here a year ago. and the effect they have on others.”

THE GLOBE AND MAIL

Cathal Kelly: Leafs dethrone Kings, but the higher the climb, the greater the fall

“The Kings are presently Kingsing through the regular season – looking profoundly unengaged by non-elimination hockey. But they’re still the Kings.”

“A day later, he was a plus-2 with one assist in a 4-3 overtime shootout win against the Los Angeles Kings, all while keeping Anze Kopitar’s line off the scoresheet.”

“The Leafs didn’t allow a single shot attempt at 5 on 5 in the final 8:43 of the third period. While they were shellacked 62-38 in this regard overall, it’s notable that the team was able to defend effectively and force overtime.”